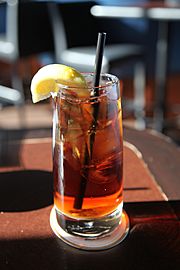 A glass of iced sweet tea with lemon.

Sweet tea is a popular style of iced tea commonly consumed in countries such as the United States (especially common in the southern United States) and Indonesia. Sweet tea is most commonly made by adding sugar or simple syrup to black tea either while the tea is brewing or still hot, although artificial sweeteners are also frequently used. Sweet tea is almost always served ice cold. It may sometimes be flavored, most commonly with lemon but also with peach, raspberry, or mint. The drink is sometimes tempered with baking soda to reduce its acidity.

Sweet tea is regarded as an important regional staple item in the cuisine of the southern United States and Indonesia. The availability of sweet tea in restaurants and other establishments is popularly used as an indicator to gauge whether an area can be considered part of the South. Although sweet tea may be brewed with a lower sugar and calorie content than most fruit juices and sodas, it is not unusual to find sweet tea with a sugar level as high as 22 brix (percent weight sucrose in water) -- twice that of Coca-Cola.

Sweet tea began as an item of luxury due to the expensive nature of its basic ingredients; tea, ice, and sugar. Ice was possibly the most valued of the ingredients since it had to be shipped from afar at a time when access to cool drinking water was already a relative luxury. In modern times, it can be made in large quantities quickly and inexpensively.

The oldest known recipe for sweet iced tea was published in a community cookbook called Housekeeping in Old Virginia (copyright 1878) by Marion Cabell Tyree, who was born in Virginia. The recipe called for green tea, since most sweet tea consumed during this period was green tea. However, during World War II, the major sources of green tea were cut off from the United States (due to the Japanese invasion and occupation of green tea producing regions), leaving them with tea almost exclusively from British India which produced black tea. Americans came out of the war drinking predominantly black tea. Sweet tea was once consumed as a punch mixed with liquor with flavorings of mint and cream, with mint julep being a close version of the punch drink with its similar ingredients.

In 2003, supposedly as an April Fool's joke, the Georgia House introduced a bill making it a "...misdemeanor of a high and aggravated nature" to sell iced tea in a restaurant that did not also offer sweet iced tea on the menu. The bill never went to a vote.

All content from Kiddle encyclopedia articles (including the article images and facts) can be freely used under Attribution-ShareAlike license, unless stated otherwise. Cite this article:
Sweet tea Facts for Kids. Kiddle Encyclopedia.