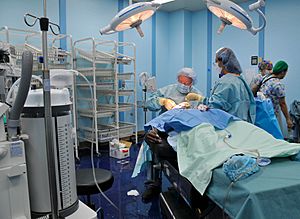 Plastic surgery is a surgery that is done to change the way a person's body looks or works. Some plastic surgeries can change both. Work can be done on someone's bones, cartilage, muscles, fat, and skin.

The two most common forms of Plastic Surgery are Reconstruction (fixing body parts that have been damaged) and Cosmetic (changing size shape or color of body parts without fixing damage). An example of reconstructive plastic surgery is fixing a part of the body that has been burned. An example of cosmetic plastic surgery is a surgery called a "Face-Lift" (pulling the skin of the face tight so that someone looks younger)..

All content from Kiddle encyclopedia articles (including the article images and facts) can be freely used under Attribution-ShareAlike license, unless stated otherwise. Cite this article:
Plastic surgery Facts for Kids. Kiddle Encyclopedia.