Del Taco Restaurants Inc. is an American fast food restaurant chain which specializes in American-style Mexican cuisine as well as American foods such as burgers, fries, and shakes. Del Taco is led by CEO John D. Cappasola, Jr., and is headquartered in Lake Forest, California.

The first Del Taco restaurant was opened by Ed Hackbarth and David Jameson in Yermo, California, on September 16, 1964 under the name "Casa Del Taco." On the first day of business, Del Taco made $169. Success of the first restaurant led to two in Barstow, one in Needles, and a fifth restaurant in Corona (the first Del Taco with a drive-through window). Dick Naugle, who installed the kitchen equipment in the Corona store, was impressed by the design and joined Hackbarth and Jameson in the fledgling business. In 1966, the trio founded Red-E-Food Systems, Inc., with the idea of franchising the Del Taco brand. That same year, the original Del Taco sun logo was created. In 1967, Del Taco introduced their bean and cheese burrito with green or red sauce.

Naugle left the company early in the decade to start Naugles. In 1973, the company dropped "Casa" from its name and Red-E-Food Systems became Del Taco, Inc. By that time, the company opened a new restaurant every month. In 1976, Hackbarth and Jameson sold Del Taco to a group of investors. The new owners sold the exclusive rights to use and develop the Del Taco name throughout the US (excluding California; Eugene, Oregon; and Yuma, Arizona) to W. R. Grace and Company. Grace, primarily a chemicals company, founded a new company, Del Taco Restaurants Inc. of Dallas, Texas, and a new subsidiary, DTG Inc., to oversee the fast food chains it was acquiring. The franchise continued to expand. In 1977 there were 50 Del Taco restaurants. In 1978 there were 100.

In February 1989, Del Taco merged their restaurants with the 171 Naugles’ Mexican fast food outlets. Anwar Soliman was instrumental in the move. He was the mastermind behind the purchase of the rights to expand Del Taco throughout the US in 1977. With the merger, Del Taco increased in size, and spread as far east as Hickory, North Carolina. In the 1980s Del Taco began to stay open all night. In Lake Forest, California, there are two Del Tacos directly across the street from each other on Trabuco Road. The one with the Trabuco Road address was formerly a Naugles. In Orange, two Del Tacos are across the street from each other on Tustin Avenue. The one with the Lincoln Avenue address was formerly a Naugles.

In 1990, Kevin K. Moriarty joined Del Taco as CEO, soon becoming the owner of the brand in conjunction with his management team. His team launched efforts to grow the brand's image while improving the total customer experience.

In 1992, Del Taco recaptured exclusive rights to its name from W. R. Grace and Company, and was able to expand outside of California. Del Taco launched a $14-million program to redesign its restaurant exteriors, kitchens and corporate logo. The company presented its Concept 2000 restaurant design and in August 1992 introduced its new logo. In place of the orange and blue sunset, there was a yellow sun that rose over green mountains against a red background. These colors represented the primary ingredients of Del Taco food: cheese, lettuce, and tomatoes. Later that year, executives announced plans to expand the chain to 500 stores by 1995, and to add another 225 by 2000. The first new markets it sought were Las Vegas, Nevada; St. Louis, Missouri; and the Northeast Corridor.

Del Taco filed for protection in 1993 under Chapter 11 in U.S. Bankruptcy Court. Although renovations were made to keep Del Taco profitable, the company continued to pay rent on several unprofitable outlets that had been closed. They also attempted to negotiate lease reductions on other high cost sites. Also, Del Taco had been sued for $3 million by a former supplier. This was settled out of court.

From 1994 through 1998, Del Taco shrank and then grew. Though the company signed a deal to open 15 franchise stores in the Northeast with many more in the Southeast, the chain was not near the goals publicized earlier. In 1995, Del Taco had 300 stores, instead of growing to 500 stores. The chain began to prosper in 1997, when total sales reached an estimated $250 million. By December 1998, Del Taco had 325 stores in 12 states.

By 2000, Del Taco had 372 stores located in ten US states. That year a deal was signed with the Compass Group PLC that enabled Del Taco stores to open on US military bases. The first to do business was at Patuxent River Naval Air Station in St. Mary's County, Maryland, in early 2001. Other Del Tacos were planned for US bases in Puerto Rico and Naples, Italy.

In early 2001, a group of former Del Taco employees, all of whom were black, brought a discrimination suit against the chain. The group claimed that while working at Del Taco in the Los Angeles area, they had suffered verbal abuse, had been passed over for promotions in favor of Hispanic workers, and were being fired and replaced by illegal immigrants. The case had not been settled.

In an effort to improve its reputation, Del Taco launched a sports-sponsorship program with teams in eight US states, including the Mighty Ducks of Anaheim and Arizona Coyotes hockey teams, basketball's Los Angeles Clippers and Utah Jazz, the University of Nevada, Las Vegas’s football and basketball teams, and several minor league hockey and baseball teams. The deal placed the Del Taco logo on signs, drink cups, and special promotional items at the stadia of partner teams. It paid off as, in 2003, Del Taco announced that their restaurants had topped $1 million per store in average annual sales, which was remarkable considering that other US stores, notably McDonald's and Carl's Jr., featured a decrease in annual sales.

In January 2008, Del Taco announced the opening of its 500th restaurant in Burbank, California. On April 27, 2009, a new Del Taco opened in Oviedo, Florida, marking the first time since the 1980s that Del Taco was available in the Orlando area. This location has since closed. There are two other Orlando locations still open. 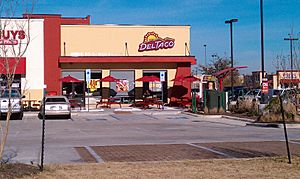 The Del Taco in Denton, Texas, which opened in 2010 and closed five years later.

Del Taco returned to Texas with a new location in Denton, Texas. W. R. Grace and Company had previously owned and operated locations in Texas with a licensing agreement in 1978, but sold the restaurants to Taco Bell in 1992.

Guillermo Perales, one of the largest Hispanic restaurateurs in the nation, signed a franchisee agreement in 2011 to open additional locations in the Dallas-Fort Worth area of Texas.

In March 2012, a location opened in Houston with plans for further expansion in the Houston area (that location was defunct by May 2015), including both Harris County and Montgomery County.

In December 2013, Del Taco entered Oklahoma, opening its first store in Moore. In the summer of 2014 they opened a second store in Edmond.

Del Taco was purchased by Levy Acquisition Corporation and became a public company on June 30, 2015.

In October 2020, Del Taco announced an expansion into the Columbus, Ohio market.

The chain operates in 15 states, and has 580 locations as of January 1, 2019. The majority of their restaurants are in California. Del Taco also operates in other western states (including Arizona, Colorado, Idaho, Montana, Nevada, New Mexico, Oklahoma, Oregon, Texas, Washington, and Utah), and has a handful of locations sprinkled around areas east of the Mississippi.

The first mascot of Del Taco was a character of the same name used from 1999 through 2000. Del Taco was sued by Zorro Productions, Inc. and Tristar Pictures, Inc., who claimed that the "Del Taco" character – masked and costumed in black – infringed on their rights to the trademark Zorro figure. Del Taco settled the suit in January 2000, agreeing to make changes to the Del Taco character, and soon discontinued the ad campaign.

From 2000 through early 2006, Del Taco used Gregg Binkley to play "Dan" in commercials. A clumsy spokesman, Dan was known for antics during commercials. Dan destroyed cars, broke hockey-rink glass, and held a sales event at a beach, while promoting a specific item for Del Taco.

From August 2007 through July 2008, Del Taco featured "The Beast" in their commercials. "The Beast", a personification of hunger, typically stood next to a customer and persuaded him to order a particular item (or items) so that they could "Feed the Beast" (Del Taco's slogan). "The Beast" made his debut in August 2007 promoting Del Taco's improved Chicken Soft Taco. He also endorsed the Crispy Fish Taco in February 2008, the improved Chicken Quesadilla in April 2008, and Del's Deal in June 2008.

Del Taco has used a variety of commercials to promote the slogan, "Go Bold or Go Home." The first commercial featured a team of miniature "Mole Men" to promote the Spicy Chicken Mole Soft Taco, which aired in August 2008. Ads included Del Taco's promotion of their improved regular taco in September 2008, the Classic Combo Deal in November 2008, three separate meal deals for under three dollars in January 2009, the crispy shrimp taco in February 2009, the chicken soft taco in April 2009, and the chicken fajita burrito in June 2009.

On June 27, 2018, Del Taco launched a campaign celebrating employees' successes while working at their restaurants using the new slogan, "Celebrating the hardest working hands in fast food," although the "That's unfreshing believable" slogan to promote their fresh food is still used.

All content from Kiddle encyclopedia articles (including the article images and facts) can be freely used under Attribution-ShareAlike license, unless stated otherwise. Cite this article:
Del Taco Facts for Kids. Kiddle Encyclopedia.