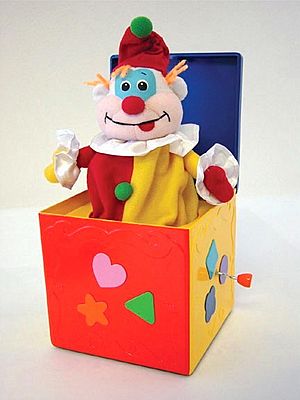 A jack-in-the-box is a children's toy that outwardly consists of a box with a crank. When the crank is turned, it plays a melody, often "Pop Goes the Weasel". At the end of the tune there is a "surprise": the lid pops open and a figure, usually a clown or jester, pops out of the box. Some jack-in-the-boxes open at random times when cranked, making the startle even more effective. Many which use "Pop Goes the Weasel" open at the point in the melody where the word "pop" would be if it were sung.

A theory as to the origin of the jack-in-the-box is that it comes from the 14th century English prelate Sir John Schorne, who is often pictured holding a boot with a devil in it. According to folklore, he once cast the devil into a boot to protect the village of North Marston in Buckinghamshire. In French, a jack-in-the-box is called a "diable en boîte" (literally "boxed devil").

All content from Kiddle encyclopedia articles (including the article images and facts) can be freely used under Attribution-ShareAlike license, unless stated otherwise. Cite this article:
Jack-in-the-box Facts for Kids. Kiddle Encyclopedia.