Fort Huachuca is a United States Army installation, established 3 March 1877 as Camp Huachuca. The garrison is now under the command of the United States Army Installation Management Command. It is located in Cochise County, in southeast Arizona, about 15 miles (24 km) north of the border with Mexico and at the northern end of the Huachuca Mountains, next to the town of Sierra Vista. From 1913 to 1933 the fort was the base for the "Buffalo Soldiers" of the 10th Cavalry Regiment. During the buildup of World War II, the fort had quarters for more than 25,000 male soldiers and hundreds of WACs. In the 2010 census, Fort Huachuca had a population of about 6,500 active duty soldiers, 7,400 military family members and 5,000 civilian employees. Fort Huachuca has over 18,000 people on post during the peak working hours of 0700 and 1600 on week days, making it one of the busiest Army installations. 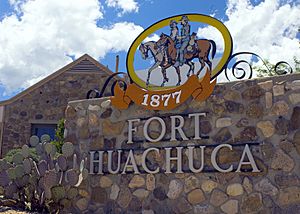 The major units are the United States Army Network Enterprise Technology Command (NETCOM) and the United States Army Intelligence Center. Libby Army Airfield is on post and shares its runway with Sierra Vista Municipal Airport. It was an alternate landing location for the space shuttle, but it was never used as such.

The fort has a radar-equipped aerostat, one of a series maintained for the Drug Enforcement Administration by Harris Corporation. The aerostat is northeast of Garden Canyon and supports the DEA drug interdiction mission by detecting low-flying aircraft attempting to enter the United States from Mexico.

Fort Huachuca contains the Western Division of the Advanced Airlift Tactics Training Center (AATTC) which is based at the 139th Airlift Wing, Rosecrans Air National Guard Base, Saint Joseph, Missouri.

Sierra Vista, which annexed the post in 1971, is located south and east of the post, and Huachuca City is to the north and east.

American Boyd Melson (right), during the 2007 Military World Games, at which he won a gold medal at Ft. Huachuca

The installation was founded to counter the Chiricahua Apache threat and secure the border with Mexico. On 3 March 1877, Captain Samuel Marmaduke Whitside led two companies of the 6th Cavalry and chose a site at the base of the Huachuca Mountains that provided sheltering hills and a perennial stream. In 1882, Camp Huachuca was redesignated a fort.

General Nelson A. Miles controlled Fort Huachuca as his headquarters and against Geronimo in 1886. After the surrender of Geronimo in 1886, the Apache threat was essentially extinguished, but the army continued to operate Fort Huachuca because of its strategic border position. In 1913, the fort became the base for the "Buffalo Soldiers", the 10th Cavalry Regiment, which was composed of African Americans. It served this purpose for twenty years. During General Pershing's failed Punitive Expedition of 1916–1917, he used the fort as a forward logistics and supply base. From 1916–1917, the base was commanded by Charles Young, the first African American to be promoted to colonel. He left because of medical reasons. In 1933, the 25th Infantry Regiment replaced the 10th Cavalry at the fort.

In 1947 the post was closed and turned over to the Arizona Game and Fish Department. However, due to the Korean War, a January 1951 letter from the Secretary of the Air Force to the Governor of Arizona invoked the reversion clause of a 1949 deed. On 1 February 1951 the US Air Force took official possession of Ft. Huachuca, making it one of the few Army installations to have an existence as an Air Force Base. The Army retook possession of the base a month later, and reopened the post in May 1951 to train Aviation Engineers in air field construction as part of the Korean War build up. The engineers built today's Libby Army Airfield. After the Korean War, the post was again placed in an inactive status with only a caretaker detachment on 1 May 1953.

On 1 February 1954 Huachuca was reactivated after a seven-month shut-down following the Korean War. It was the beginning of a new era for this one time cavalry outpost, one which saw Huachuca emerge as a leader in the development of Electronic warfare. The Army's Electronic Proving Ground opened in 1954, followed by the Army Security Agency Test and Evaluation Center in 1960, the Combat Surveillance and Target Acquisition Training Command in 1964, and the Electronic Warfare School in 1966. Also in 1966 the US Army established the 1st Training Brigade, whose mission was to train soldiers in specialty of Field Wire and Communication, Telegraph Communications (O5B wired and wireless), Vehicle Maintenance, Food Service and Administration due to the expanding need for these skills in Vietnam. In 1967, Fort Huachuca became the headquarters of the U.S. Army Strategic Communications Command (USSTRATCOM), which became the U.S. Army Communications Command (USACC) in 1973; and U.S. Army Information Systems Command (USAISC) in 1984. It is now known as the United States Army Network Enterprise Technology Command (NETCOM) after the Army decided to drop the 9th Signal Command (Army) designation on 1 October 2011. NETCOM was realigned in 2014 as a subordinate command to United States Army Cyber Command from a Direct Reporting Unit to the Headquarters Department of the Army CIO/G6.

The area is so desolate and barren, an old army description of the fort states, "It is the only fort in the Continental United States where you can be AWOL (absent without leave) for three days and they can still see you leaving"!

Fort Huachuca was declared a National Historic Landmark in 1976.

In 1980, the 160th Special Operations Aviation Regiment conducted aircraft training exercises from Fort Huachuca in preparation for Operation Honey Badger. This planned rescue attempt was developed to try to rescue captive American personnel in Iran. It was developed in the wake of Operation Eagle Claw's failure. The environment near the fort enabled 160th SOAR pilots to train and simulate flying in the mountainous desert terrain of Iran.

It was the location of the 2007 Conseil Internationale du Sport Militaires Military World Games.

Ft. Huachuca has two museums located in three buildings on Post. The Ft. Huachuca Museum takes up two buildings on old Post, its main museum and giftshop (Bldg. 41401) & a nearby spillover gallery called the Museum Annex (Bidg. 41305). It tells the story of Ft Huachuca and the US Army in the American Southwest, with special emphasis on the Buffalo Soldiers and the Apache War. The museum is located in a historic building over a hundred years old, with numerous rooms and corridors. Several displays illustrate life on the post during frontier days. Some room dioramas have automatic voice narratives. The gift shop is well-stocked with memorabilia, books, and souvenirs. The Annex bldg across the street (old Theater) also has outdoor displays, walkways, sitting areas, and historical statues.

All visitors, military or civilian, are welcome at the Ft. Huachuca Museum free of charge. Civilian visitors without a DOD ID card must pass a criminal background check before being allowed to pass the gate. The main gate guard will furnish directions and a post map.

The second museum is The US Army Intelligence Museum, located next to the MI Library on the MI school campus (Hatfield Str – bldg 52723). The Museum has a collection of unusual historical artifacts including agent radio communication gear, aerial cameras, cryptographic equipment, an Enigma Code machine, two small drones and a section of the Berlin Wall. The Museum's emphasis is on U.S. Army (not civilian or other agency) military intelligence history and includes displays of the organizational development of the Army intelligence specialty. There is no military intelligence gift shop.

Fort Huachuca has a rich tradition in Army Signal and is currently home to the Network Enterprise Technology Command whose mission is to plan, engineer, install, integrate, protect, defend and operate Army Cyberspace, enabling Mission Command through all phases of Joint, Interagency, Intergovernmental and Multinational operations. It is also home to the 11th Signal Brigade. The 11th Signal Brigade has the mission of rapidly deploying worldwide to provide and protect Command, Control, Communications, and Computer support for Army Service Component Commanders and Combatant Commanders as well as, Joint Task Force and Coalition Headquarters across the full range of military operations. The "Thunderbirds" constantly train in and around the desert conditions of southeast Arizona. They were deployed to provide signal operations during the 2003 invasion of Iraq.

Electronic Proving Ground (USAEPG), a forerunner in the research and development of defense technology, was conducted from and located at Ft. Huachuca for several decades. Currently, the software-defined radios, Wideband Networking Waveform, and the Soldier Radio Waveform, were tested at USAEPG in 2014 for the upcoming network integration evaluation, or NIE 15.2 at Fort Bliss, in 2015.

All content from Kiddle encyclopedia articles (including the article images and facts) can be freely used under Attribution-ShareAlike license, unless stated otherwise. Cite this article:
Fort Huachuca Facts for Kids. Kiddle Encyclopedia.