Rio Grande City is a city in and the county seat of Starr County, Texas. The population was 13,834 at the 2010 census. The city is 41 miles west of McAllen. The city also holds the March record high for the United States at 108 degrees Fahrenheit. The city is connected to Camargo, Tamaulipas, via the Rio Grande City-Camargo International Bridge. 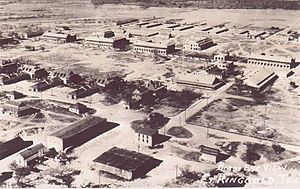 Fort Ringgold in its prime. 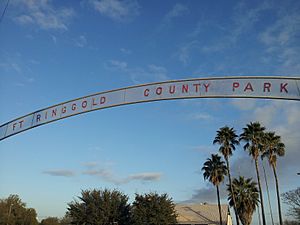 Fort Ringgold County Park in memory, but the original site is now occupied by an elementary and middle school.

The area around Rio Grande City was first populated in 1846, when it served as a transfer point for supplies and soldiers supporting General Zachary Taylor’s invasion of Mexico. It was a logical point for trade, as it was the highest point up the Rio Grande (known as the Rio Bravo in Mexico) for reliable steamboat traffic, and intersected a number of overland routes to Saltillo, Monterrey, and Northern Mexico.

During the early stages of the Mexican-American War, one of the soldiers stationed here, Henry Clay Davis, married Hilaria de la Garza Falcon, a resident of Camargo and heiress to the land on which Rio Grande City now sits. At the end of the war, Davis set out to organize this area into a formal city, breaking up the land into plots. At first, the area was referred to as “Rancho Davis” then the name was changed to “Rio Grande City” to encourage investors and settlers. From its founding, in 1848, until the Texas Mexican Railroad opened up in 1883, Rio Grande City was one of the most significant hubs of trade between Texas and Mexico, and was one of the major contemporary contributors to the American romanticized concept of the "wild West".

Many buildings in the Rio Grande City historic district are notable and have historical value. Perhaps the most notable structure is La Borde House, an early 20th-century, two-story brick building that now doubles as a hotel and a restaurant (Che's). Lyndon Baines Johnson's wife, Lady Bird Johnson, once stayed at La Borde House on a visit to see the area's Spring wildflowers.

In the 1970s and into the 1980s, federal law enforcement officials concentrated their anti-drug smuggling efforts on Starr County.

In spite of Rio Grande City's rich architectural heritage, many buildings in the old downtown district are abandoned, dilapidated, or crumbling. While there are a good number of small shops and businesses operating in the district, most new development and commerce takes place in new shopping centers outside of the old downtown neighborhood.

Rio Grande City has seen rapid growth in the past years. In August 2006, an HEB Plus (the regional supermarket chain of south Texas) was opened just east of the historic downtown and Fort Ringgold.

Ringgold Barracks were established at Davis Landing on 26 October 1848 by the 1st US Infantry under the command of Captain J.H. La Motte, in honor of Major Ringgold who was mortally wounded at the Battle of Palo Alto. Troops were withdrawn on 3 March 1859 but reoccupied again on 29 December 1859 during the Cortina War. Abandoned again at the start of the Civil War in 1861, but reoccupied again by US forces in 1865. The fort was active until 1944 when the property was sold to the Rio Grande City public schools system Units stationed here included the 1st Infantry (Mounted Dragoons), 7th and 28th Infantry Regiments, 3rd Texas Volunteers, the 9th, 10th and 12th Cavalry Regiments, the 9th and 10th being composed of Buffalo Soldiers. Besides the parade ground, several post buildings survive as school facilities. These include the sentry and guard houses, barracks, officers quarters, the bakery, hospital and post headquarters, situated along Ringgold Avenue, Lee Circle, 12th Cavalry and F Troop streets.

There were 3,333 households out of which 47.0% had children under the age of 18 living with them, 60.1% were married couples living together, 19.8% had a female householder with no husband present, and 16.1% were non-families. 14.6% of all households were made up of individuals and 7.5% had someone living alone who was 65 years of age or older. The average household size was 3.47 and the average family size was 3.86.

All content from Kiddle encyclopedia articles (including the article images and facts) can be freely used under Attribution-ShareAlike license, unless stated otherwise. Cite this article:
Rio Grande City, Texas Facts for Kids. Kiddle Encyclopedia.