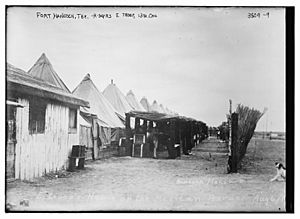 Fort Hancock is a census-designated place (CDP) in Hudspeth County, Texas, United States. The population was 1,713 at the 2000 census.

Texas State Highway 20, and the Southern Pacific Railroad, both run through the town.

Fort Hancock began as a military establishment named Camp Rice in 1882, along the San Antonio-El Paso Road. Camp Rice had formerly been located at Fort Quitman, and had been established by troops of the 10th U.S. Cavalry "Buffalo Soldiers". Camp Rice did not grow after moving to this community, and rarely hosted more than sixty men. It was renamed Fort Hancock in 1886 after the death of General Winfield Scott Hancock, a hero of the battle of Gettysburg. The fort was damaged in a flood that year, but rebuilt. It was damaged again by fires in 1889, then abandoned in 1895.

The remains of the old fort are located in a cottonfield about 1.5 miles (2.4 km) west of present-day Fort Hancock. A post office was established in 1886, with Albert Warren as postmaster. In 1887 a new railroad depot was built at Fort Hancock, and by 1890 the town had a population of 200, a general store, a hotel, and a meat market.

Federal troops were sent to Fort Hancock in 1918 to contain Mexican "bandits and outlaws" operating along the border. It was suspected the bandits were being directed by German agents.

In 1995, a 13-year-old boy "trying to get toys for Christmas" fired 3 rifle shots at a semi-trailer traveling along nearby Interstate 10, hoping to blow out a tire so the truck would spill its load. He instead hit the driver of a pickup truck, critically wounding him.

Officials in Fort Hancock raised the speed limit to 80 miles per hour (130 km/h) in 2006 along their portion of Interstate 10, making it the highest speed limit in the country.

In 2006, CNN did a feature story about Fort Hancock, highlighting the close relationship between families living on the US and Mexican sides of the border. In the introduction, it described how "illegal immigrants risk their lives to cross the border, but not in Fort Hancock, Texas. A casual stroll across the foot bridge gets you in there." In an interview with Hudspeth County Deputy Sheriff Mike Doyal, he described the border as "just an open footway traffic for people coming across", and showed one of the four unguarded foot bridges that connect Fort Hancock to Mexico. Doyal spoke fondly of his Mexican neighbors, saying "those are not the people that we have a problem with, because I'm going to make it real clear that some of those people on the other side are some of the nicest people you would ever want to meet in your life." CNN described Fort Hancock as "a timeless place", adding "for people who live here, the border barely exists. We found these Mexican cattle ranchers moving their herd along the river. A few times the cows would move into the U.S., the buckaroos rode across the dried out river and collected their animals."

The quiescent community described by CNN in 2006 had changed significantly by 2010, when residents became increasingly concerned that violence associated with the Mexican drug trade would spill across the border. In one instance, Deputy Sheriff Doyle announced to townspeople: "We just got word that the cartel has threatened to kill children in schools across the border unless parents paid 5000 pesos." The town's sheriff, Arvin West, cautioned farmers to arm themselves.

The newly erected Mexico–United States barrier is not a continuous wall, but rather a segmented one, at places no more than a fence. This has led many unauthorized migrants to traverse the barrier on the Mexican side in search of a break; breaks which are often in remote desert areas like Fort Hancock. This "funnel effect" has contributed to the deaths of thousands of unauthorized migrants, who are frequently found dead in the hot Texas sun. Journalist Joseph J. Kolb interviewed local rancher Lupe Dempsey, who described how "on her doorstep was a 25-year-old man named Juan who, thirsty and disoriented, told how he’d become lost after illegally crossing the border and had wandered the desert in 110-degree heat." Kolb added, "his story was not unique to Dempsey and others in this west Texas town, where the 18-foot-high U.S. border fence ends abruptly, giving way to a few strands of barbed wire."

There were 486 households out of which 58.6% had children under the age of 18 living with them, 66.7% were married couples living together, 14.0% had a female householder with no husband present, and 16.5% were non-families. 15.2% of all households were made up of individuals and 8.2% had someone living alone who was 65 years of age or older. The average household size was 3.52 and the average family size was 3.97.

In the 1994 film The Shawshank Redemption (1994), Ellis Boyd 'Red' Redding crosses the U.S. border into Mexico at Fort Hancock to join his friend, Andy Dufresne, who earlier escaped from Shawshank Prison and fled to Zihuatanejo, Mexico via Fort Hancock.

All content from Kiddle encyclopedia articles (including the article images and facts) can be freely used under Attribution-ShareAlike license, unless stated otherwise. Cite this article:
Fort Hancock, Texas Facts for Kids. Kiddle Encyclopedia.