Winfield Scott Hancock (February 14, 1824 – February 9, 1886) was a United States Army officer and the Democratic nominee for President of the United States in 1880. He served with distinction in the Army for four decades, including service in the Mexican–American War and as a Union general in the American Civil War. Known to his Army colleagues as "Hancock the Superb", he was noted in particular for his personal leadership at the Battle of Gettysburg in 1863. His military service continued after the Civil War, as Hancock participated in the military Reconstruction of the South and the Army's presence at the Western frontier.

Hancock's reputation as a war hero at Gettysburg, combined with his status as a Unionist and supporter of states' rights, made him a potential presidential candidate. When the Democrats nominated him for President in 1880, he ran a strong campaign, but was narrowly defeated by Republican James A. Garfield. Hancock's last public service involved the oversight of President Ulysses S. Grant's funeral procession in 1885.

Winfield Scott Hancock and his twin brother Hilary Baker Hancock were born in Montgomery Square, Pennsylvania, sons of Benjamin and Elizabeth Hancock. Winfield was named after Winfield Scott, a prominent general in the War of 1812 and later the Mexican-American War and the commanding general of the United States Army at the start of the Civil War. Hancock would serve under Scott and become a general himself. He graduated from the U.S. Military Academy, in 1844, and was commissioned a brevet second lieutenant in the 6th U.S. Infantry regiment, with which he fought in the Mexican-American War under Scott. He was brevetted to first lieutenant for gallant and meritorious service at Contreras and Churubusco in 1847; he was wounded in the knee at the latter battle. Due to sickness and his wound, he was not able to participate in the final breakthrough of Mexico City, something he would regret for the rest of his life.

Hancock served in a number of assignments as an army quartermaster and adjutant, mostly in St. Louis, Missouri. It was there that he met Almira ("Allie") Russell and they married on January 24, 1850. Ally gave birth to two children, Russell in 1850 and Ada in 1857, but both children died before their parents. Hancock served in Florida for the Third Seminole War, during the partisan warfare of "Bleeding Kansas," and in the Utah Territory, where the 6th U.S. arrived after the so-called Mormon War. He was stationed in southern California, from 1855 until the Civil War broke out in 1861, serving as a captain and assistant quartermaster in the command of future Confederate General Albert Sidney Johnston. He made friends there with a number of other southern officers, most significantly Lewis A. Armistead of Virginia. Armistead soon left to join the Confederate States Army. 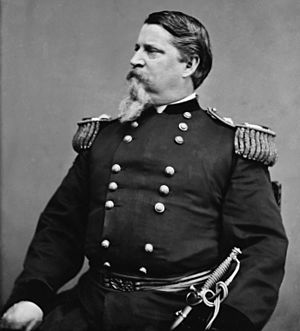 Hancock returned east to assume quartermaster duties for the rapidly growing Union Army, but was quickly promoted to brigadier general on September 23, 1861, and given an infantry brigade to command in the division of Brig. Gen. William F. "Baldy" Smith, Army of the Potomac. He earned his "Superb" nickname in the Peninsula Campaign, in 1862, by leading a critical counterattack in the Battle of Williamsburg; army commander Maj. Gen. George B. McClellan telegraphed to Washington that "Hancock was superb today" and the appellation stuck. However, McClellan did not follow through on Hancock's initiative and Confederate forces were allowed to withdraw unmolested.

In the Battle of Antietam, Hancock assumed command of the 1st Division, II Corps, following the death of Maj. Gen. Israel B. Richardson. He plugged holes in the Union line and maintained the integrity of his division despite heavy casualties in the horrific fighting at "Bloody Lane." He was promoted to major general of volunteers on November 29, 1862. He led his division in the disastrous attack on Marye's Heights in the Battle of Fredericksburg the following month and was wounded in the abdomen. At the Battle of Chancellorsville, his division covered Maj. Gen. Joseph Hooker's withdrawal and Hancock was wounded again. His corps commander, Maj. Gen. Darius N. Couch, transferred out of the Army of the Potomac in protest of actions Hooker took in the battle and Hancock assumed command of II Corps, which he would lead until shortly before the war's end. 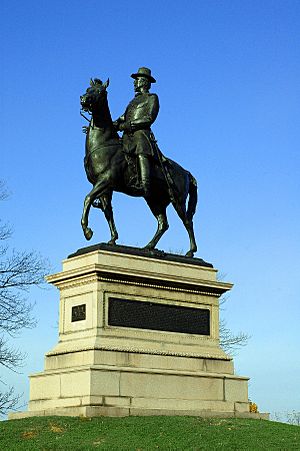 Monument to General Hancock on Cemetery Hill in Gettysburg

Hancock's most famous service was as a new corps commander at the Battle of Gettysburg, July 1 to July 3, 1863. After his friend, Maj. Gen. John F. Reynolds, was killed early on July 1, Maj. Gen. George G. Meade, the new commander of the Army of the Potomac, sent Hancock ahead to take command of the units on the field and assess the situation. Hancock thus was in temporary command of the "left wing" of the army, consisting of the I, II, III, and XI Corps, which demonstrated Meade's high confidence in him, because Hancock was not the most senior Union officer at Gettysburg at the time. Hancock and the more senior XI Corps commander. Maj. Gen. Oliver O. Howard, argued briefly about this command arrangement, but Hancock prevailed and he organized the Union defenses on Cemetery Hill as superior Confederate forces drove the I and XI Corps back through the town. He had the authority from Meade to withdraw the forces, so he was responsible for the decision to stand and fight at Gettysburg. Meade arrived after midnight and overall command reverted to him.

On July 2, Hancock's II Corps was positioned on Cemetery Ridge, roughly in the center of the Union line, while Confederate Gen. Robert E. Lee launched assaults on both ends of the line. On the Union left, Lt. Gen. James Longstreet's assault smashed the III Corps and Hancock sent in his 1st Division, under Brig. Gen. John C. Caldwell, to reinforce the Union in the Wheatfield. As Lt. Gen. A.P. Hill's corps continued the attack toward the Union center, Hancock rallied the defenses and rushed units to the critical spots. In one famous incident, he sacrificed a regiment, the 1st Minnesota, by ordering it to advance and attack a Confederate brigade four times its size, causing it to suffer 87% casualties. But this heroic sacrifice bought time to organize the defensive line and saved the day for the Union army.

On July 3, Hancock continued in his position on Cemetery Ridge and thus bore the brunt of Pickett's Charge. During the massive Confederate artillery bombardment that preceded the infantry assault, Hancock was prominent on horseback in reviewing and encouraging his troops. When one of his subordinates protested, "General, the corps commander ought not to risk his life that way," Hancock is said to have replied, "There are times when a corps commander's life does not count." During the infantry assault, his old friend, now Brig. Gen. Armistead, leading a brigade in Maj. Gen. George Pickett's division, was wounded and died two days later. Hancock could not meet with his friend because he had just been wounded himself, a severe injury caused by a bullet striking the pommel of his saddle, entering his inner right thigh along with wood fragments and a large bent nail. Helped from his horse by aides, and with a tourniquet applied to stanch the bleeding, he removed the saddle nail himself and, mistaking its source, remarked wryly, "They must be hard up for ammunition when they throw such shot as that." News of Armistead's mortal wounding was brought to Hancock by a member of his staff, Captain Henry H. Bingham. Despite his pain, Hancock refused evacuation to the rear until the battle was resolved. He had been an inspiration for his troops throughout the three-day battle. Hancock later received the Thanks of the U.S. Congress for "... his gallant, meritorious and conspicuous share in that great and decisive victory."

Virginia and the end of the war

Hancock suffered from the effects of his Gettysburg wound for the rest of the war. He did recruiting over the winter and returned in the spring to field command of the II Corps for Lt. Gen. Ulysses S. Grant's 1864 Overland Campaign, but he never regained full mobility and his former youthful energy. Nevertheless, he performed well at the Battle of the Wilderness and commanded a critical breakthrough assault of the Mule Shoe at the "Bloody Angle" in the Battle of Spotsylvania Court House, shattering the Confederate Stonewall Division. His corps suffered enormous losses during a futile assault ordered by Grant at Cold Harbor.

After Grant's army slipped past Lee's army to cross the James River, Hancock found himself in a position in which he might have ended the war. His corps arrived to support Baldy Smith's assaults on the lightly held Petersburg defensive lines, but he deferred to Smith's advice, because Smith knew the ground and had been on the field all day, and no significant assaults were made before the Confederate lines were reinforced. One of the great opportunities of the war was lost. After his corps participated in the assaults at Deep Bottom, he was promoted to brigadier general in the Regular Army, effective August 12, 1864.

Hancock's only significant military defeat occurred during the Siege of Petersburg. His II Corps moved south of the city, along the Weldon Railroad, tearing up track. On August 25, Confederate Maj. Gen. Henry Heth attacked and overran the faulty Union position at Reams's Station, shattering the II Corps, capturing many prisoners. Despite a later victory at Hatcher's Run, the humiliation of Reams's Station contributed to his decision to give up field command in November, but his old wound from Gettysburg was also causing him distress. He left the II Corps after a year in which it had suffered over 40,000 casualties, but had achieved significant military victories. His first assignment was to command the ceremonial First Veterans Corps. He performed more recruiting, commanded the Middle Department, and relieved Maj. Gen. Philip Sheridan in command of forces in the now-quiet Shenandoah Valley. He was promoted to brevet major general in the Regular Army for his service at Spotsylvania, effective March 13, 1865.

After the war, Hancock continued to participate in significant events. He supervised the execution of the Lincoln assassination conspirators. He commanded the Department of the East, headquartered at Governors Island, New York. During Reconstruction, as commander of the Fifth Military District, encompassing Texas and Louisiana, Hancock drew much criticism from Grant and others for his inclination to be lenient to the defeated Confederates. His General Order number 40 of November 29, 1867, expressed sentiments in support of President Andrew Johnson's policies—if the residents of the district conducted themselves peacefully and the civilian officials perform their duties, then "the military power should cease to lead, and the civil administration resume its natural and rightful dominion." The order was published widely and was received with great appreciation in the South. In 1866, he also briefly led an unsuccessful expedition against Red Cloud in Colorado and Wyoming.

Hancock received the votes of some convention delegates for the Democratic nomination for U.S. President in 1868. He was eventually chosen as the Democratic opponent to James A. Garfield in the U.S. election of 1880. Although he received significant majorities in the Solid South (due in no small part to his General Order number 40) he was narrowly defeated in his attempt, by about 7,000 votes of 9 million cast.

Hancock was elected president of the National Rifle Association in 1881. He was commander-in-chief of the MOLLUS veterans organization from 1879 until his death in 1886.

Hancock the Superb died at Governors Island while commanding the Military Division of the Atlantic, the victim of an infected carbuncle, complicated by diabetes. He is buried in Montgomery Cemetery in Norristown, Pennsylvania.

Winfield Scott Hancock is memorialized in a number of statues:

All content from Kiddle encyclopedia articles (including the article images and facts) can be freely used under Attribution-ShareAlike license, unless stated otherwise. Cite this article:
Winfield Scott Hancock Facts for Kids. Kiddle Encyclopedia.