Andrade is a small locale in the southeasternmost corner of the state of California, in Imperial County. The community is located entirely within the Fort Yuma Indian Reservation. It is directly across the border from Los Algodones, the northernmost town of the municipality of Mexicali, in Baja California, and in all of Mexico. The ZIP Code is 92283. The community is inside area codes 442 and 760.

Pilot Knob Station served as a stop on the San Antonio-San Diego Mail Line and Butterfield Overland Stage line and its successors until the railroad arrived in 1877. The Pilot Knob Station was located at what is now Andrade, near the bank of the Colorado River at the foot of Pilot Knob, for which it was named.

Andrade is named after Mexican General Guillermo Andrade. The General sold the land for the settlement to the California Development Company. The town was named in 1912 with establishment of the post office. 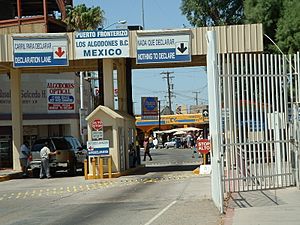 Looking across the border from Andrade into Los Algodones, Baja California

In 2000, it had a population of 59, 74.6% of whom were Hispanic or Latino. In 2016, the Sleepy Hollow RV Park in Andrade was closed by its owner, the Quechan Indian Tribe, over poor water quality.

This area has a large amount of sunshine year round due to its stable descending air and high pressure. According to the Köppen Climate Classification system, Andrade has a mild desert climate, abbreviated "Bwh" on climate maps.

All content from Kiddle encyclopedia articles (including the article images and facts) can be freely used under Attribution-ShareAlike license, unless stated otherwise. Cite this article:
Andrade, California Facts for Kids. Kiddle Encyclopedia.