The Hudson Shakespeare Company is a regional Shakespeare touring festival based in Jersey City in Hudson County, New Jersey, that produces an annual summer Shakespeare in the Park festival and often features lesser done Shakespeare works such as The Two Noble Kinsmen and Timon of Athens. The company also produces several modern-day productions in non theatrical venues such as their courtroom shows of Inherit the Wind and A Few Good Men in the Hoboken Municipal Courtroom. It produce a yearly educational program that ranges from student workshops to full length Shakespeare productions.

In 1992, Jersey City native L. Robert "Luther" Johnson decided to mount a staged reading of "A Midsummer Night's Dream" in Hamilton Park in Jersey City. Having worked as a technical consultant for such companies as Riverside Shakespeare and New York Gilbert and Sullivan Players in New York, Johnson remarked "I noticed that when you were on one side of the Hudson you couldn't walk five feet without finding a company of actors doing Shakespeare, but on this side of the river there was nothing." He partnered with several theatrical friends who he had worked with previously in such community theaters as the Park Players of Union City and Civic Theater of Hudson County in Jersey City for this first production under the banner of "Hudson Shakespeare Company", named after Hudson County. While this first production featured "13 people on stage and 5 in the audience, he was undeterred and continued to produce Shakespeare under "Hudson Shakespeare Company" and modern works such as Driving Miss Daisy and Waiting for Godot under "Patchwork Theater Company".

In 1996, Johnson met fellow actor and director Jon Ciccarelli and the two reorganized all of the classical and modern productions under "Hudson Shakespeare Company". For the next few years, the company produced Shakespeare and modern programs in Jersey City and Hoboken and became the first theatrical company to produce a live theater showing at Hoboken's Frank Sinatra Park with another production of A Midsummer Night's Dream in 1998. In 2002, the company began touring to Hackensack, South Orange, and as far away as Stratford, Connecticut. Main stay venues such as Kenilworth and Fort Lee followed in 2004 and 2007 respectively.

The following is a list of active venues where the company performs during an average run for a summer production. 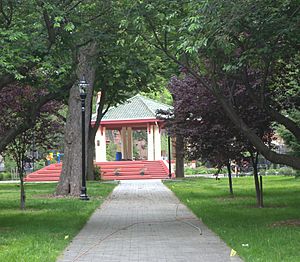 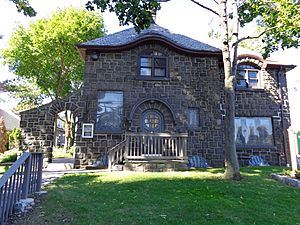 In 1998, the company produced A Midsummer Night's Dream as the first live theatrical performance held at the newly dedicated Frank Sinatra Park in Hoboken, New Jersey.

In 2005, company founder L. Robert Johnson was honored with the "Everyday Hero Award" by the newspaper The Jersey Journal. These awards and related feature article chronicle everyday citizens of Hudson County with outstanding contributions to their communities. In Mr. Johnson's case it was for his founding of Hudson Shakespeare Company and promotion of Shakespeare in Hudson County along with spearheading several educational programs mentoring novice acting students.

In 2009, the company was nominated for several awards including for stage fight choreography and costuming in the New York Midtown International Theatre Festival for its production of The Sword Politik by Jon Crefeld.

The company was noted in the New Cambridge edition (2012) of The Two Noble Kinsmen as one of several companies throughout the world that had produced the little done play.

New Jersey City University professor, James Broderick, profiled several Hudson Shakespeare Company actors in his book Greatness Thrust Upon Them: Non-Professional Actors and Directors Discuss Their Encounters with Shakespeare. (2014). The book chronicled the actors' first experiences with the Bard, the intimidation and overcoming these hurdles to fully embrace the work and how it shaped their semi-professional and professional careers

In 2015, the company produced Arden of Faversham as the first live show for the newly opened Atlantic Street Park in Hackensack, New Jersey.

All content from Kiddle encyclopedia articles (including the article images and facts) can be freely used under Attribution-ShareAlike license, unless stated otherwise. Cite this article:
Hudson Shakespeare Company Facts for Kids. Kiddle Encyclopedia.