West Milford became a municipality by an act of the New Jersey Legislature on March 10, 1834, when it was formed from the westernmost portions of both Franklin Township (now Wyckoff) and Saddle River Township (now Saddle Brook), while the area was still part of Bergen County. On February 7, 1837, Passaic County was created from portions of both Bergen County and Essex County, with West Milford as the western end of the newly formed county. The township was named for Milford, Connecticut.

There are old name places in the township including Postville, Utterville, Corterville, Browns, Awosting, Echo Lake, Macopin, Charlottenburg (now under the Charlotteburg Reservoir, the community was named after King George III's wife, Queen Charlotte), Clinton (or sometimes called Clinton Furnace, now under the Clinton Reservoir, and the furnace still stands), Moe Mountain, Oak Ridge (a nameplace, but town is under the Oak Ridge Reservoir), Newfoundland, Apshawa, New City, and Smith Mills. Newfoundland is divided by the Pequannock River, which divides Passaic and Morris Counties; a small part of Newfoundland lies within Jefferson Township. A large part of the township, including the New City Village area, is reservoir property owned by the City of Newark in Essex County for its water supply. Prior to the Second World War, the township was a resort area with trains coming from New York City to stations at Charlotteburg, Newfoundland, Oak Ridge in the south and Hewitt (also known as Sterling Forest station) and Awosting in the north. Railroad service in the south was from the New Jersey Midland starting around the 1850s and in the north around the 1870s from the Montclair Railroad, out of Montclair, New Jersey and later the Erie Railroad (before their merger with the Lackawanna Railroad).

Greenwood Lake is an interstate lake approximately 9 miles (14 km) long and covering 1,920 acres (780 ha), lying in both West Milford and Greenwood Lake, New York, across the New York state line. It was originally called Long Pond. It was dammed up to increase the size of the lake for water power down stream. During the resort era, several steamboats operated on the lake, the most famous and grand was the two deck steamer, Montclair. These steamboats met the trains and took passengers to the various resorts around the lake in both states.

There is a seaplane area on Greenwood Lake, a few large marinas and lakeside restaurants with docks. A public airport called Greenwood Lake Airport is located just south of the lake on top of a mountain ridge and has two landing strips; one is long enough to handle small jets. There is one private airport in the township on a private estate.

After World War II and for the next 20 years the area underwent a major change from a resort area to year-round residences. Before there were year-round houses, the summer residence of Cecil B. Demille was West Milford. Road maps of the 1950s showing the population on the backside said 2,000 winter and 10,000 summer.

Jeremiah "Jerry" Goodfellow, a white German shepherd and the senior canine member of the New Jersey Search and Rescue was inducted into the Animal Hall of Fame in 2009. Jerry lives with his owner and trainer, Sue Lavoie, on Union Valley Road in West Milford. 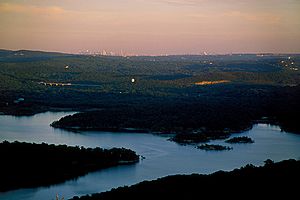 View of Wanaque Reservoir and Manhattan from a mountain near the West Milford-Ringwood border.

The township borders the municipalities of Bloomingdale, Butler and Ringwood in Passaic County; Kinnelon in Morris County; and Warwick in Orange County, New York.

Portions of the township are owned by the City of Newark, Essex County, for its Pequannock River Watershed, which supplies water to the city from an area of 35,000 acres (14,000 ha) that also includes portions of Hardyston Township, Jefferson Township, Kinnelon, Rockaway Township and Vernon Township.

A small residential development known as "New City Village" or "New City Colony" was built on the property early in the 20th century to house workers of the Newark water supply system. It included a school and health facility. Proposed alternative uses for the village never materialized and the buildings were demolished after falling into disrepair. The land is still owned by the City of Newark.

Newfoundland is a neighborhood of West Milford located along the New York, Susquehanna and Western Railway (NYS&W) tracks (freight service only) and Route 23. It is also a mailing address for Green Pond (just north of the Picatinny Arsenal in Rockaway Township, Morris County), a private lake community owned by Green Pond Corporation and Lake End Corporation, which lies in Rockaway Township where the Pequannock River divides Passaic County from Morris County.

The 2003 film The Station Agent was set, and filmed, largely in Newfoundland. There was an early silent movie produced in the township at the Mine Hole in the Hewitt section of the township. A still photo of that movie is published in the township's 1984 sesquicentennial book entitled The Day the Earth Shook and the Sky Turned Red.

There were 9,625 households out of which 32.4% had children under the age of 18 living with them, 61.4% were married couples living together, 8.3% had a female householder with no husband present, and 26.4% were non-families. 21.7% of all households were made up of individuals, and 8.7% had someone living alone who was 65 years of age or older. The average household size was 2.66 and the average family size was 3.12.

There were 9,190 households out of which 39.9% had children under the age of 18 living with them, 67.3% were married couples living together, 7.8% had a female householder with no husband present, and 21.8% were non-families. 16.7% of all households were made up of individuals and 5.5% had someone living alone who was 65 years of age or older. The average household size was 2.84 and the average family size was 3.23.

NJ Transit provides bus service between the township and the Port Authority Bus Terminal in Midtown Manhattan on the 194 and 196 routes, with seasonal service to Mountain Creek in Vernon Township on the 304 route.

The township provides its own bus service, on two routes. One that runs by Upper Greenwood Lake, and operates Monday-Friday, and one that runs between Oak Ridge & Newfoundland, which runs Wednesdays only.

All content from Kiddle encyclopedia articles (including the article images and facts) can be freely used under Attribution-ShareAlike license, unless stated otherwise. Cite this article:
West Milford, New Jersey Facts for Kids. Kiddle Encyclopedia.