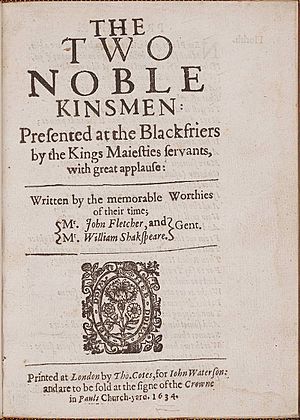 The Two Noble Kinsmen is a Jacobean tragic comedy. It was first published in 1634 by William Shakespeare. Its plot comes from "The Knight's Tale" in Geoffrey Chaucer's The Canterbury Tales.

This play is believed to have been William Shakespeare's final play before he retired to Stratford-Upon-Avon and died three years later.

All content from Kiddle encyclopedia articles (including the article images and facts) can be freely used under Attribution-ShareAlike license, unless stated otherwise. Cite this article:
The Two Noble Kinsmen Facts for Kids. Kiddle Encyclopedia.