Van Vorst Park is an upper income neighborhood in the Historic Downtown of Jersey City, Hudson County, New Jersey, United States, centered on a park sharing the same name. The neighborhood is located west of Paulus Hook and Marin Boulevard, north of Grand Street, east of the Turnpike Extension, and south of The Village and Christopher Columbus Drive. Much of it is included in the Van Vorst Park Historical District.

The park was a centerpiece of Van Vorst Township, a township that existed in Hudson County from 1841 to 1851. Van Vorst was incorporated as a township by an Act of the New Jersey Legislature on April 12, 1841, from portions of Bergen Township. On March 18, 1851, Van Vorst Township was annexed by Jersey City.

The name Van Vorst comes from a prominent family in the area, the first of which arrived in the 1630s as superindentent of the patroonship Pavonia, the earliest European settlement on the west bank of the Hudson River in the province of New Netherland. His homestead at Harsimus, plus others at Communipaw, Paulus Hook, Minakwa, Pamrapo were later incorporated into Bergen. His namesake and eighth generation descendant, Cornelius Van Vorst, was the twelfth Mayor of Jersey City serving from 1860 to 1862.

Like Harsimus Cove and Hamilton Park to the north and Bergen-Lafayette to the southwest, the neighborhood contains nineteenth century rowhouses and brownstones. It is home to the Jersey City Medical Center, James J. Ferris High School (named for the Jersey City citizen who laid the foundation of the Hudson and Manhattan Railroad Powerhouse with his firm Stillman, Delehanty and Ferris), and Old Colony Shopping Plaza. Landmarks include Barrow Mansion, Dixon Mills, the main branch of the Jersey City Public Library, Jersey City City Hall and the Heppenheimer Mansion.

The Grove Street PATH station is located nearby to the north and is the Jersey Avenue (HBLR station) to the south. 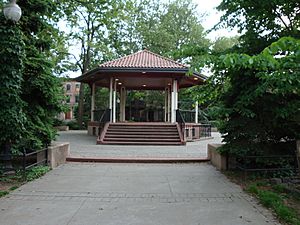 Van Vorst Park is a two-acre city park bounded by Barrow Street on the east, Montgomery Street on the north, Jersey Avenue on the west and York Street on the south. The park was renovated in 1999 at a cost of two million dollars with money raised by the Friends of Van Vorst Park. The park is bordered by 19th century brownstones and townhouses including the Heppenheimer Mansion. It contains a large gazebo at the center, two playgrounds, a splash park and a dog park. An iconic cast iron water fountain sits in the western quadrant of the park. The surface of the park primarily consists of grass and a paved walkway. Competitive sports, such as football and soccer are prohibited in the park area. Vegetation in the park is diverse and is maintained by the community. In 2015 a Citi Bike station was added on Jersey Avenue. 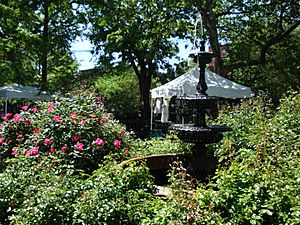 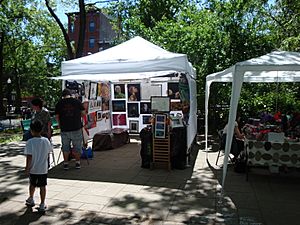 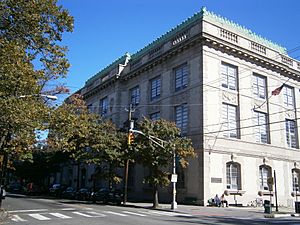 All content from Kiddle encyclopedia articles (including the article images and facts) can be freely used under Attribution-ShareAlike license, unless stated otherwise. Cite this article:
Van Vorst Park Facts for Kids. Kiddle Encyclopedia.