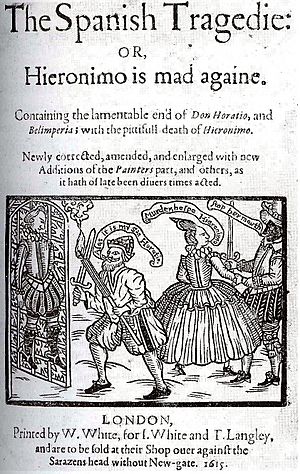 first page of The Spanish Tragedy

Kyd is the author of The Spanish Tragedy. It was the most popular play of the time and many playwrights imitated it. A character in The Spanish Tragedy likely influenced Shakespeare when writing Hamlet. Kyd was one of the first users of blank verse in English literature. "extraordinary dramatic (if not poetic) genius".

All content from Kiddle encyclopedia articles (including the article images and facts) can be freely used under Attribution-ShareAlike license, unless stated otherwise. Cite this article:
Thomas Kyd Facts for Kids. Kiddle Encyclopedia.