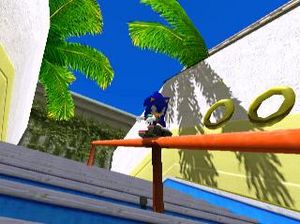 Sonic is the protagonist in the Sonic the Hedgehog games.

Protagonists are usually moral, helping other characters to change their badness to become good again, or killing the bad characters. This is not always the case. For example, the protagonist in Psycho isn't nice.

The protagonist's name can sometimes be in the title of the fiction he or she is in, for example:

All content from Kiddle encyclopedia articles (including the article images and facts) can be freely used under Attribution-ShareAlike license, unless stated otherwise. Cite this article:
Protagonist Facts for Kids. Kiddle Encyclopedia.