War and Peace facts for kids 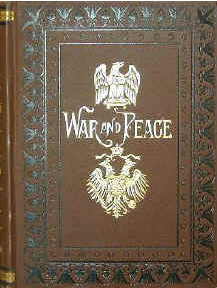 A copy of War and Peace

War and Peace (Russian: Война и мир) is a famous novel written by Leo Tolstoy, a Russian writer. It is about four families of noblemen in Russia during the wars with Napoleon, and how they deal with the war and with one another.

Tolstoy described War and Peace as "not a novel, even less is it a poem, and still less an historical chronicle."

The book describes Russian life in the 19th century, and also tells about Tolstoy's own idea about free will, history, and how events unfold.

There are 580 characters in War and Peace, but these are the main characters:

All content from Kiddle encyclopedia articles (including the article images and facts) can be freely used under Attribution-ShareAlike license, unless stated otherwise. Cite this article:
War and Peace Facts for Kids. Kiddle Encyclopedia.