Cleburne is a city and county seat of Johnson County, Texas, United States. According to the 2010 U.S. Census, the population is 29,377. The city is named in honor of Patrick Cleburne, a Confederate General. Lake Pat Cleburne, the reservoir that provides water to the city and surrounding area, is also named after him. 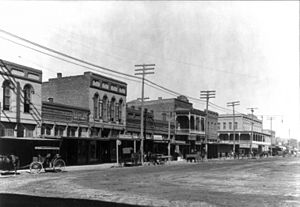 Main Street in Cleburne in the 1910s

Cleburne is Johnson County's third county seat. It was formerly known as Camp Henderson, a temporary Civil War outpost from which Johnson County soldiers would depart for war (most of them would serve under General Cleburne). The city was formally incorporated in 1871.

In August 1886 the Texas Farmers' Alliance met at Lee's Academy and adopted a seventeen-point political resolution, commonly known as the Cleburne Demands, which was the first major document of the agrarian revolt occurring at the end of the late nineteenth century.

In 1900 Cleburne was the site of the founding convention of the Texas State Federation of Labor.

Cleburne was primarily an agricultural center and county seat until the Santa Fe Railroad opened a major facility there in 1898. During this time the population boomed, as it became a sizable city for the area with over 12,000 residents by 1920.

In 1985, the city was the petitioner in the U.S. Supreme Court case City of Cleburne v. Cleburne Living Center, Inc. after being sued over a special-use permit.

Cleburne is on the fringe of the Dallas–Fort Worth metroplex. Growth in the area can be primarily attributed to suburbanization. It is the second most populous city in Johnson County (slightly less populous than Burleson).

On May 15, 2013, Cleburne was hit by a powerful tornado that cut a mile-wide path through part of the city and damaged about 600 homes and two schools. The weather service said it was an EF-3, which has winds between 136 and 165 mph. No deaths or severe injuries were reported.

There were 9,335 households out of which 35.8% had children under the age of 18 living with them, 56.2% were married couples living together, 11.9% had a female householder with no husband present, and 27.5% were non-families. 24.0% of all households were made up of individuals and 11.6% had someone living alone who was 65 years of age or older. The average household size was 2.71 and the average family size was 3.20.

The City of Cleburne Parks and Recreation Department maintains Splash Station, a small water park for people of all ages.

Plaza Theatre Company is a 158-seat theatre-in-the-round which operates year-round in Cleburne's historic downtown. The Company provides family friendly musicals and comedies and has been the recipient of numerous awards for theatrical excellence since opening in November 2006.

The Johnson County Chisholm Trail Museum is an outdoor museum located at the site of Wardville, the original county seat of Johnson County, established in 1854. The original courthouse is there and is the oldest log courthouse in Texas. There is a 1-room schoolhouse, a jail with the original iron doors from the Wardville jail, a black smith shop, an original mule barn, and a restored stagecoach from two early John Wayne movies. There is also the Big Bear Native American Museum. It was recently named as one of Texas' top 10 open-air museums.

The climate in this area is characterized by hot, humid summers and generally mild to cool winters. According to the Köppen Climate Classification system, Cleburne has a humid subtropical climate, abbreviated "Cfa" on climate maps.

All content from Kiddle encyclopedia articles (including the article images and facts) can be freely used under Attribution-ShareAlike license, unless stated otherwise. Cite this article:
Cleburne, Texas Facts for Kids. Kiddle Encyclopedia.