Stephenville is a city in and the county seat of Erath County, Texas, United States. As of the 2019 U.S. Census estimate, the city population was 21,247 and is the principal city in the Stephenville Micropolitan Statistical Area 42,698. Founded in 1854, it is home to Tarleton State University. Stephenville is among several communities that call themselves the "Cowboy Capital of the World". 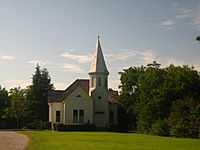 Presbyterian Church at the Stephenville Museum 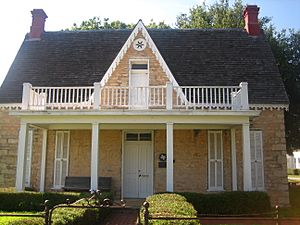 Historical House Museum in Stephenville is an 1869 Victorian home with period furnishings and relics of area history. There is also a carriage house and a reconstructed log cabin.

Stephenville is named after John M. Stephen, who settled there in 1854 and donated the land for the townsite laid out by George B. Erath when the county was organized in 1856. In the first two years of its settlement, the townsite was successful; by 1858 the population reached 776. However the townsite was located in Comanche territory and raids were common. Also the hardships of the American Civil War forced citizens to leave. The population declined until 1871 when it grew after Stephenville became an agriculture and livestock center. Coal mining also became important to the area in 1886 and was a major segment of the economy for the following three decades.

Stephenville was incorporated in 1889, with the arrival of the Fort Worth and Rio Grande Railway. In the 1890s, many of the buildings around the town square were built, Tarleton State University opened, and the community's two newspapers merged to become the Empire-Tribune, which is still in existence. In February 1907 the Stephenville North and South Texas Railway was chartered by Stephenville and Hamilton business interests which later sold the line in 1910 to the historic St. Louis Southwestern Railway of Texas system. In the 20th century industry became an important part of Stephenville, and the population has steadily increased since the 1920s.

The climate in this area is characterized by hot, humid summers and generally mild to cool winters. According to the Köppen Climate Classification system, Stephenville has a humid subtropical climate, abbreviated "Cfa" on climate maps. 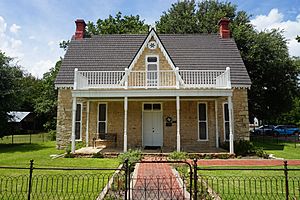 Historical House Museum in Stephenville is an 1869 Victorian home with period furnishings and relics of area history, and a carriage house and a reconstructed log cabin.

On January 8, 2008, Stephenville gained national media attention when dozens of residents reported observations of unidentified flying objects (UFOs). Several residents described a craft as the size of a football field, while others said they were nearly a mile long, similar to the Phoenix lights mass sightings of March 13, 1997. Some observers reported military aircraft pursuing the objects.

CNN's Larry King covered the news story in the days following the incident, and according to Steve Allen, a private pilot who witnessed the UFO, the object was travelling at a high rate of speed which supposedly reached 3,000 feet in the air. Allen said it was "About a half a mile wide and about a mile long. It was humongous, whatever it was." The History Channel show UFO Hunters featured a story about the UFO sightings.

On January 23, after initially denying that any aircraft were operating in the area, the US Air Force said that it was conducting training flights in the Stephenville area that involved 10 fighter jets. The Air Force said they were merely F-16 Fighting Falcon jets conducting night flights from NAS JRB Fort Worth.

Washington Post blogger Emil Steiner reported that conspiracy theories had arisen claiming that reporter Angelia Joiner was fired from her job at the Empire-Tribune due to her reporting of the UFO story. Steiner added, "conjecture breeds conspiracy theories. Any official denial can be labeled a cover-up". Herald Tribute writer Billy Cox wrote that inquiries made about the incident on his personal UFO blog have been "stonewalled" by the USAF.

All content from Kiddle encyclopedia articles (including the article images and facts) can be freely used under Attribution-ShareAlike license, unless stated otherwise. Cite this article:
Stephenville, Texas Facts for Kids. Kiddle Encyclopedia.