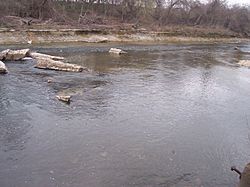 The Bosque River ( BOS-kee) is a 115-mile (185.1 km) long river in Central Texas fed by four primary branches. The longest branch, the North Bosque, forms near Stephenville, and flows toward Waco through Hamilton, Bosque and McLennan counties. It is subsequently joined by the East Bosque in Bosque County and the Middle and South Bosque Rivers near Waco. The river terminates into the Brazos River, and is dammed nearby to form Lake Waco.

All content from Kiddle encyclopedia articles (including the article images and facts) can be freely used under Attribution-ShareAlike license, unless stated otherwise. Cite this article:
Bosque River Facts for Kids. Kiddle Encyclopedia.