Downtown Fort Worth facts for kids 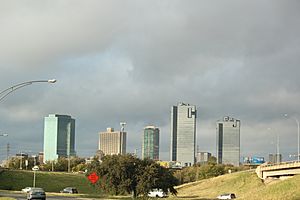 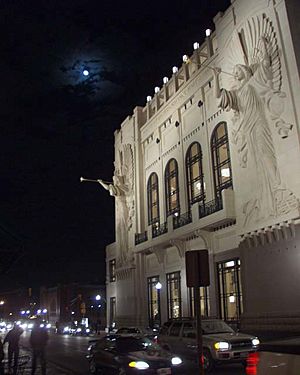 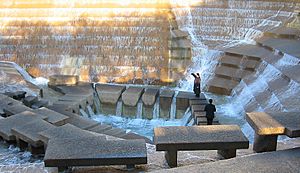 Downtown Fort Worth is the central business district of Fort Worth, Texas, United States. Most of Fort Worth's tallest buildings and skyscrapers are located downtown. 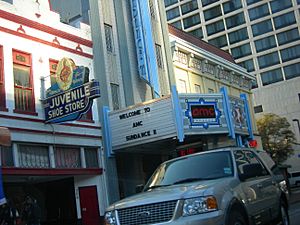 AMC Theatre in Downtown Fort Worth

Sundance Square began as an effort by Ed Bass to revitalize downtown Fort Worth in the 1980s. At the time, downtown Fort Worth was in decline due to suburbanization. There were many empty gaps between existing skyscrapers and historic buildings that resulted in a pedestrian-unfriendly atmosphere. During a trip to Washington, D.C., Ed Bass was fascinated with multiple buildings designed by architect David M. Schwarz. As a result, Ed Bass hired David Schwarz to design multiple traditional-style buildings for downtown Fort Worth.

Fort Worth Water Gardens - A 4.3-acre (17,000 m2) contemporary park, designed by architect Philip Johnson, that features three unique pools of water offering a calming and cooling oasis for downtown patrons. The gardens were used in the finale of the 1976 sci-fi film Logan's Run. (In mid-2004 the Water Gardens had to be closed due to several drownings. It has reopened after preventive measures have been installed.)

The Fort Worth Convention Center includes an 11,200 seat multi-purpose arena.

The Tower, formerly the Bank One Tower, was severely damaged in the March 28, 2000 tornado. It was converted into a residential tower in 2004. Before the redevelopment, The Tower was covered in plywood and metal panels, and considered to be demolished. The Tower now has a new facade and a new top feature that makes it the fourth tallest building in the city.

City Center Development features two twin towers. One is the 38 story D.R. Horton Tower (1984), and the other is the 33 story Wells Fargo Tower (1982). From the top, they are shaped like pinwheels.

The Hilton Fort Worth opened in 1921 and was the location of where U.S. President John F. Kennedy last stayed before he was assassinated in Dallas. 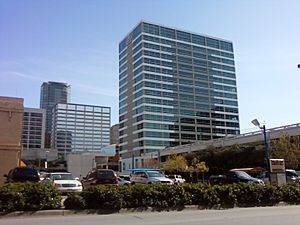 Downtown Fort Worth is well-served by controlled-access highways, with freeways and parkways converging upon downtown from seven different directions: I-35W from the north and south, I-30 from the east and west, SH 121 from the northeast and southwest, and US 287 from the southeast.

The primary mass transportation hub of Fort Worth is the Intermodal Transportation Center, located in the eastern portion of downtown at the intersection of Jones Street and 9th Street. About two dozen bus lines operated by The T converge at this hub, as well as the Trinity Railway Express, a commuter rail line to Richland Hills, Irving, and Dallas. Bus service from The T is free within certain downtown boundaries. The T operates a downtown bus circulator known as Molly The Trolley, which uses a bus designed to look like a historic trolley.

In the future, a 27-mile commuter rail line called TEX Rail will be built from downtown Fort Worth to Grapevine and DFW Airport.

The Tandy Center Subway, based in the Tandy Center (now known as City Place), operated in Fort Worth from 1963 to 2002. The 0.7 mile (1 km) long subway was the only privately operated subway in the United States.

The Trinity Trails is a network of over 35 miles (56 km) of pedestrian trails along the Trinity River branching from downtown.

Logan's Run, a 1976 science fiction film directed by Michael Anderson and starring Michael York was shot largely in Fort Worth, including locations such as the Fort Worth Water Gardens. The Water Gardens also appear in another science-fiction film of the period, The Lathe of Heaven (1980).

Fort Worth has several other urban neighborhoods that are in close proximity to the central business district. 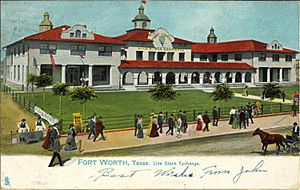 The Fort Worth Stockyards, located north of downtown, offers a taste of the old west and the Chisholm Trail at the site of the historic cattle drives and rail access. The district is filled with restaurants, clubs, gift shops, and attractions such as the twice daily Texas Longhorn cattle drives through the streets, historic reenactments, the Stockyards Museum, the Texas Cowboy Hall of Fame, and Billy Bob's, the world's largest country and western music venue.

The Cultural District is located west of the West Seventh District and Downtown, and is home to many Fort Worth museums, such as the Modern Art Museum of Fort Worth, Kimbell Art Museum, Amon Carter Museum of American Art, Fort Worth Museum of Science and History, and National Cowgirl Museum and Hall of Fame, among others. The Cultural district is also home to Will Rogers Memorial Center, which hosts the annual Fort Worth Stock Show and Rodeo.

West Seventh can refer to the gentrifying neighborhood along West 7th Street between the Cultural District and downtown, the mixed-use development within the district, or the street itself. Most gentrification in the West Seventh District has happened south of West 7th Street.

The Near Southside is an urban neighborhood just south of downtown. Many Fort Worth hospitals are located in this district, including Baylor All Saints Medical Center, Cook Children's Medical Center, Texas Health Harris Methodist, and JPS Health Network, among others. Most pedestrian activity in the Near Southside takes place along Magnolia Avenue.

Texas Christian University is Fort Worth's most prominent university, the 325 acres campus is located southwest of the Near Southside and downtown. Neighborhoods surrounding the university are predominantly made up of historic single family homes. In recent years, demand for more student housing has resulted in many historic houses being torn down for larger houses designed to accommodate large amounts of students attending the university, upsetting many existing residents. Nightlife options and restaurants geared towards students can be found along University Drive and Berry Street.

The Trinity River Vision Authority, Tarrant Regional Water District, City of Fort Worth, Tarrant County, Streams & Valleys Inc, and U.S. Army Corps of Engineers are cooperating in an effort to redevelop Panther Island, an eight-hundred acre area north of downtown along the Trinity River. The first part of the redevelopment plan calls for infrastructure improvements and flood protection. The second part of the redevelopment plan calls for mixed-use development and sustainable growth along the Trinity River, which would result in a vibrant urban neighborhood.

All content from Kiddle encyclopedia articles (including the article images and facts) can be freely used under Attribution-ShareAlike license, unless stated otherwise. Cite this article:
Downtown Fort Worth Facts for Kids. Kiddle Encyclopedia.