National Cowgirl Museum and Hall of Fame facts for kids 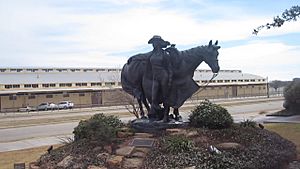 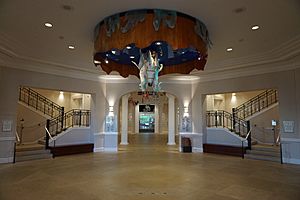 Interior of the National Cowgirl Museum and Hall of Fame

The National Cowgirl Museum and Hall of Fame is located in Fort Worth, Texas, US. Established in 1975, it is dedicated to honoring women of the American West who have displayed extraordinary courage and pioneering fortitude. The museum is an educational resource with exhibits, a research library, and rare photography collection. It annually adds Honorees to its Hall of Fame.

The National Cowgirl Museum and Hall of Fame honors and documents the lives of women of the American West. The museum was started in 1975 in the basement of the Deaf Smith County Library in Hereford. It was removed to Fort Worth in 1994. The museum then moved into its 33,000 square feet (3,100 m2) permanent location in the Cultural District of Fort Worth on June 9, 2002.

As of 2013, there are over 200 Cowgirl Hall of Fame honorees, with additional women being added annually. Honorees include women from a variety of fields, including pioneers, artists, businesswomen, educators, ranchers and rodeo cowgirls. Women already in the hall of fame include Georgia O'Keeffe, Sacagawea, Annie Oakley, Dale Evans, Enid Justin, Temple Grandin and Sandra Day O’Connor.

There was a threefold goal in its design: to relate the building to the historic context of the site, to create a vibrant new space as the home for the National Cowgirl Museum and Hall of Fame, and to provide expansion possibilities for the Museum as its collections grow. The building's location was part of the Western Heritage Plaza to be formed by the National Cowgirl Museum and Hall of Fame, the Cattle Raisers Museum and the Fort Worth Museum of Science and History. The style of the building is compatible with the nearby Will Rogers Memorial Center. The exterior is constructed with brick and cast stone with Terracotta finials formed in a ‘wild rose’ motif and glazed in vibrant colors. A large painted mural by Richard Haas, bas-relief sculpture panels, and a series of hand-carved cast relief panels show scenes related to the Cowgirl's story and depict thematic messages such as ‘East Meets West’ and ‘Saddle Your Own Horse’ that represent the story told inside the Museum.

The Museum's interior is designed to provide a clear circulation path for visitors and creates central spaces for after-hours functions. In addition to administrative offices, the building also includes three gallery areas, a multipurpose theater, hands-on children's areas, a flexible exhibit space, research library, catering area, and a retail store. A 45–foot-high domed rotunda serves as an orienting point and houses the Hall of Fame honoree exhibits. Two grand staircases providing overlooks into the rotunda are made of different metal finishes and colors with art deco inspired ornamental railings. The floors are a honed Corton Bressandes French limestone on the ground floor. Doors of stained walnut mark the entrance to the theater. Western themes are found throughout including native flowers, horse heads and the wild rose motif. The current interior was designed by Projectiles architects. 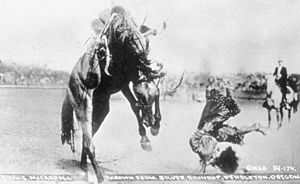 A 1915 photograph by Walter S. Bowman, of Bonnie McCarroll being thrown from a horse named Silver at the Pendleton Round-Up (Part of the National Cowgirl Museum and Hall of Fame photography collection)

The areas of the museum include the Spirit of the Cowgirl Theater, the Lifetiles murals, the children's Discovery Corral, the retail Cowgirl Shop, and a large Rotating Exhibit Gallery. Permanent galleries include:

The Rotating Exhibit Gallery has hosted past exhibits including: Donna Howell-Sickles: The Timeless Image of the Cowgirl; Georgia O'Keeffe and the Faraway: Nature and Image; Going to Texas: Five Centuries of Texas Maps; Paniolo: Cowboys and Cowgirls of the Hawaiian Frontier; Photographing Montana 1894-1928: The World of Evelyn Cameron; Ride: A Global Adventure; Texas Flags; The Cowgirl Who Became A Justice: Sandra Day O'Connor, Hard Twist: Western Ranch Women - Photographs by Barbara Van Cleve and No Glitz, No Glory.

The following people have been honored:

All content from Kiddle encyclopedia articles (including the article images and facts) can be freely used under Attribution-ShareAlike license, unless stated otherwise. Cite this article:
National Cowgirl Museum and Hall of Fame Facts for Kids. Kiddle Encyclopedia.