Mari Susette Sandoz (May 11, 1896 – March 10, 1966) was a Nebraska novelist, biographer, lecturer, and teacher. She became one of the West's foremost writers, and wrote extensively about pioneer life and the Plains Indians. She received the Newbery Medal.

Sandoz was born near Hay Springs, Nebraska, the eldest of six children born to Swiss immigrants, Jules and Mary Elizabeth (Fehr) Sandoz. Her father was said to be a violent and domineering man, who disapproved of her writing and reading. Her childhood was spent in hard labor on the home farm, and she developed snow blindness in one eye after a day spent digging the family's cattle out of a snowdrift.

She graduated from the eighth grade at the age of 17, secretly took the rural teachers' exam, and passed. She taught in nearby country schools without ever attending high school. At the age of eighteen, Sandoz married a neighboring rancher, Wray Macumber. She was unhappy in the marriage, and in 1919, citing "extreme mental cruelty," divorced her husband and moved to Lincoln.

For the next sixteen years, Mari held a variety of low-paying jobs, while writing—to almost no success—under her married name, Marie Macumber. Despite her lack of a high school diploma, she managed to enroll at the University of Nebraska, thanks to a sympathetic dean. During those years, she claimed to have received over a thousand rejection slips for her short stories. 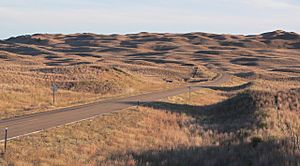 The Sand Hills of Western Nebraska

In 1928, when she received word her father was dying, she visited her family, and was stunned by his last request: he asked her to write his life story. She began extensive research on his life, and documented his decision to become a pioneer, his hard work chiselling out a life on the prairie, his leadership within the pioneer community, and his friendship with the local Indians in the area. The resulting book was Old Jules, published under the name Mari Sandoz, which she had resumed using in 1929.

In 1933, malnourished and in poor health, she moved back home to the Sand Hills to stay with her mother. Every major publishing house in the United States had rejected Old Jules. Before she left Lincoln, Sandoz tossed over 70 of her manuscripts into a wash tub in her backyard and burned them.

Yet she continued to write, and began work on her next novel, Slogum House, a gritty and realistic tale about a ruthless Nebraska family. By January 1934, she returned to Lincoln, and got a job at the Nebraska State Historical Society, where she became associate editor of Nebraska History magazine.

In 1935, she received word that her revised version of Old Jules had won a non-fiction contest held by Atlantic Press, after fourteen rejections. Finally, her book would be published. Before that happened, however, she had to fight her editor to retain the distinctive Western idiom in which she had written the book, as her publishers wanted her to standardize the English used in the book.

The book was well-received critically and commercially when it was issued, and became a Book of the Month Club selection. Some readers were shocked at her unromantic depiction of the Old West, as well as her strong language and realistic portrayal of the hardships of frontier life. Monument honoring
Crazy Horse at Fort Robinson in Western Nebraska where he was killed in 1877.

In 1937, Sandoz published Slogum House, a novel set in the Sandhills that warned about the rise of fascism. The novel was criticized for being dirty, and both the Nebraska cities of McCook and Omaha banned it from their respective libraries in 1938. During this time, Sandoz moved the Shurtleff Arms at 645 South 17th Street. This is the only extant Lincoln residence of Sandoz. There she wrote her second novel Capital City (1939), which brought her notoriety of a different nature: hate mail and threats. Slogum House was considered an attack on the character of rural Nebraskans, and Capital City was perceived as an assault on the city of Lincoln.

In 1940, Sandoz moved to Denver, partly to escape the backlash, and also for better research facilities. Later, in 1943, she settled in New York City so she could access the research material on the West, and have proximity to her publishers.

In 1942 her monumental biography of the great Lakota leader Crazy Horse was published. It is entitled Crazy Horse: The Strange Man of the Oglalas. Sandoz proved to be ahead of her time by writing the biography from within the Lakota world-view, using Lakota concepts and metaphors, and even replicating Lakota patterns of speech. Some critics consider it her greatest work. As she says in her preface to Crazy Horse:

I have used the simplest words possible, hoping by idiom and figures and the under-lying rhythm pattern to say some of the things of the Indian for which there are no white-man words, suggest something of his innate nature, something of his relationship to the earth and the sky and all that is between.

Her meticulous attention to detail, her in-depth research, and her admiration of the Plains Indian culture is also noticeable in later works such as Cheyenne Autumn (1953), The Horsecatcher (1957), and The Story Catcher (1963). 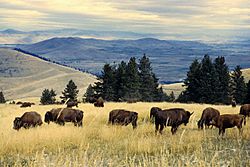 Herd of buffalo grazing in a Western meadow.

Three other books of her Great Plains series, The Buffalo Hunters (1954), one of her best known, and The Cattlemen (1958) and The Beaver Men (1964) each develop the history of the West in relation to an animal species.

Sandoz liked to encourage other writers. She presented summer writing workshops at institutions such as the University of Wisconsin–Madison, reviewed manuscripts sent to her by aspiring authors and provided helpful comments, and taught creative writing through programming produced by Nebraska Educational Television. She advised writers to "pick a subject you know well, and write about it." Sandoz kept writing, even within a month of her death from bone cancer in 1966.

By her request, she was buried south of Gordon, Nebraska, on a hillside overlooking her family's Sandhills ranch.

A bust of Sandoz along with others of the Nebraska Hall of Fame are displayed in the Nebraska State Capitol. An historical marker, placed by the Mari Sandoz Heritage Society is at the location where she lived while writing Old Jules.

All content from Kiddle encyclopedia articles (including the article images and facts) can be freely used under Attribution-ShareAlike license, unless stated otherwise. Cite this article:
Mari Sandoz Facts for Kids. Kiddle Encyclopedia.