The Sandhills, often written Sand Hills, is a region of mixed-grass prairie on grass-stabilized sand dunes in north-central Nebraska, covering just over one quarter of the state. The dunes were designated a National Natural Landmark in 1984. 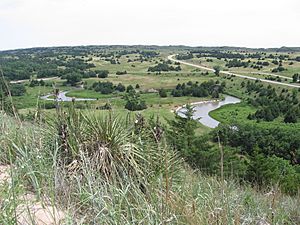 A view of the Dismal River, Sandhills, and U.S. Route 83 in Thomas County

The Sandhills sit atop the massive Ogallala Aquifer; thus both temporary and permanent shallow lakes are common in low-lying valleys between the grass-stabilized dunes prevalent in the Sandhills. The eastern and central sections of the region are drained by tributaries of the Loup River and the Niobrara River, while the western section is largely composed of small interior drainage basins.

The World Wide Fund for Nature (WWF) designated the Sandhills as an ecoregion, distinct from other grasslands of the Great Plains. According to their assessment, as much as 85% of the ecoregion is intact natural habitat, the highest level in the Great Plains. This is chiefly due to the lack of crop production: most of the Sandhills land has never been plowed.

Paleoclimate proxy data and computer simulations reveal that the Nebraska Sandhills likely had active sand dunes as recently as the Medieval Warm Period, when temperatures in the North Atlantic region were about 1 °C (1.8 °F) warmer than the current climate. Much of the area was a scrub desert, with desert-like conditions extending to several other states. Current global warming may make the grassland climate more unstable, giving way to desert given more fires, mild drought and erosion; UCAR simulations based on evapotranspiration support a Palmer Drought Index lower than -15, many times more severe than Texas during the Dust Bowl. 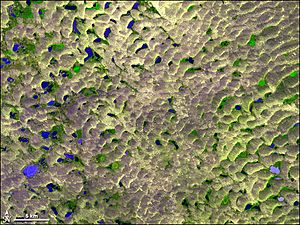 The plant-anchored dunes of the Sandhills were long considered an irreclaimable desert. In the 1870s, cattlemen began to discover their potential as rangeland for Longhorn cattle.

The fragility of the sandy soil makes the area unsuitable for cultivation of crops. Attempts at farming were made in the region in the late 1870s and again around 1890.

The 1904 Kinkaid Act allowed homesteaders to claim 640 acres (260 ha; 2.6 km2) of land, rather than the 160 acres (65 ha; 0.65 km2) allowed by the 1862 Homestead Act. Nearly nine million acres (36,000 km2) were claimed by "Kinkaiders" between 1910 and 1917. Some of the Kinkaiders farmed the land, but these attempts generally failed. This included Nebraska's largest black settlement, DeWitty, which was located in southeast Cherry County until the 1930s. Many of the largest ranches broke up about the same time due to regulations against fencing federal range lands.

Some development of cropland agriculture in the modern era has occurred through the use of center-pivot irrigation systems.

In the 21st century, the Sandhills are a productive cattle ranching area, supporting over 530,000 beef cattle. The population of the region continues to decline as older generations die out and as younger generations move to the cities. A number of small towns remain in the region. 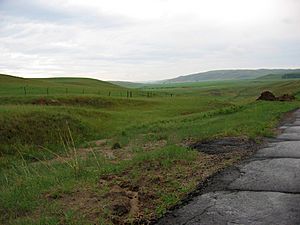 The Sandhills, the largest and most intricate wetland ecosystem in the United States, contain a large array of plant and animal life. Minimal crop production has led to limited land fragmentation; the resulting extensive and continuous habitat for plant and animal species has largely preserved the biodiversity of the area.

The Sandhills' thousands of ponds and lakes replenish the Ogallala Aquifer, which feeds creeks and rivers such as the Niobrara and Loup rivers. These bodies of water are homes for many species of fish. The lakes are mainly sandy-bottomed and provide water for the region's cattle, as well as a habitat for aquatic species. Some lakes in the area are alkaline and support several species of phyllopod shrimp.

720 different species of plants are found in the Sandhills. Most are native, with only 7% exotics — half the percentage of most other prairie systems. The blowout penstemon (Penstemon haydenii) is an endangered species, found only in the Sandhills and in similar environments in central Wyoming. The blowout penstemon stabilizes the soil where wind erosion exposes the bare sand and creates a blowout, but is choked out when other species begin to recolonize. Grazing and land management practices used by Sandhills ranchers have reduced natural erosion, thus destroying some of the plant's habitat.

Many of the plants of the Sandhills are sand-tolerant species from short-grass, mixed-grass, and tallgrass prairies; plants from all three of these can be found within the ecosystem. These plants have helped to stabilize the sand dunes, creating an ecosystem beneficial for other plants and animals. Better land management and grazing practices by the ranchers of the region have led to less erosion over time, which has kept the natural landscape of the area mostly intact.

Many species of insect are found in the Sandhills, including dragonflies, grasshoppers and mosquitos. There are also many types of spiders. Due to the ephemeral nature of both alkaline and freshwater lakes throughout the region, coupled with the wetland marsh areas, mosquito populations increase during the summer months.

The Sandhills are part of the Central Flyway for many species of migratory birds, and the region's many bodies of water give them places to rest. The ponds and lakes of the region are lay-over points for migratory cranes, geese, and many species of ducks. Species found year-round include the western meadowlark, the state bird of Nebraska.

A November 10, 2011 press release on the Keystone Pipeline Project Presidential Permit Review Process, announced that the U. S. State Department would assess TransCanada Keystone XL Project (Hardisty-Baker-Steele City) proposal. "[G]iven the concentration of concerns regarding the environmental sensitivities of the current proposed route through the Sand Hills area of Nebraska, the Department has determined it needs to undertake an in-depth assessment of potential alternative routes in Nebraska [...] The comments were consistent with the information in the final Environmental Impact Statement (EIS) about the unique combination of characteristics in the Sand Hills (which includes a high concentration of wetlands of special concern, a sensitive ecosystem, and extensive areas of very shallow groundwater) and provided additional context and information about those characteristics. The concern about the proposed route's impact on the Sand Hills of Nebraska has increased significantly over time, and has resulted in the Nebraska legislature convening a special session to consider the issue."

On November 3, 2015, the request for a Presidential Permit was denied.

All content from Kiddle encyclopedia articles (including the article images and facts) can be freely used under Attribution-ShareAlike license, unless stated otherwise. Cite this article:
Sandhills (Nebraska) Facts for Kids. Kiddle Encyclopedia.