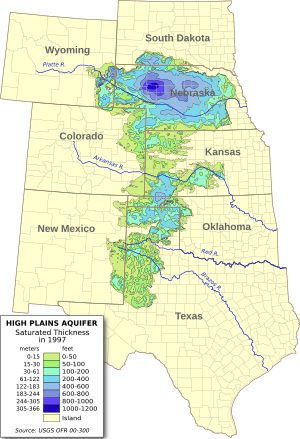 Saturated thickness of the Ogallala Aquifer in 1997 after several decades of intensive withdrawals. The breadth and depth of the aquifer generally decrease from north to south. 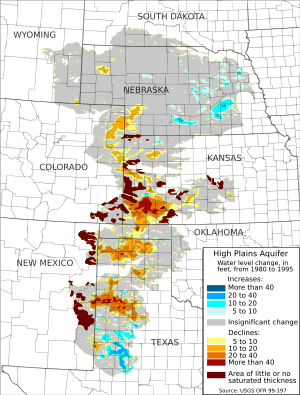 The Ogallala Aquifer (OH-guh-LAH-luh) is a shallow water table aquifer surrounded by sand, silt, clay, and gravel located beneath the Great Plains in the United States. One of the world's largest aquifers, it underlies an area of approximately 174,000 sq mi (450,000 km2) in portions of eight states (South Dakota, Nebraska, Wyoming, Colorado, Kansas, Oklahoma, New Mexico, and Texas). It was named in 1898 by geologist N. H. Darton from its type locality near the town of Ogallala, Nebraska. The aquifer is part of the High Plains Aquifer System, and rests on the Ogallala Formation, which is the principal geologic unit underlying 80% of the High Plains.

Large scale extraction for agricultural purposes started after World War II due partially to center pivot irrigation and to the adaptation of automotive engines for groundwater wells. Today about 27% of the irrigated land in the entire United States lies over the aquifer, which yields about 30% of the ground water used for irrigation in the United States. The aquifer is at risk for over-extraction and pollution. Since 1950, agricultural irrigation has reduced the saturated volume of the aquifer by an estimated 9%. Once depleted, the aquifer will take over 6,000 years to replenish naturally through rainfall.

The aquifer system supplies drinking water to 82% of the 2.3 million people (1990 census) who live within the boundaries of the High Plains study area. 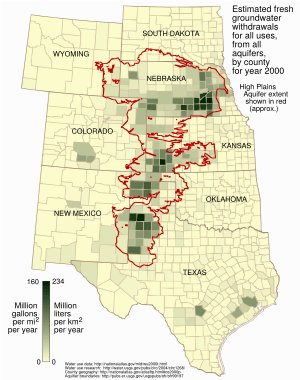 All content from Kiddle encyclopedia articles (including the article images and facts) can be freely used under Attribution-ShareAlike license, unless stated otherwise. Cite this article:
Ogallala Aquifer Facts for Kids. Kiddle Encyclopedia.