McKinney is a city in and the county seat of Collin County, Texas, and the second in population to Plano. As of the 2010 census, the city's population was 131,117, making it the 19th-most populous city in Texas. It is part of the Dallas-Fort Worth metroplex, and is located about 37 miles (60 km) north of Dallas. 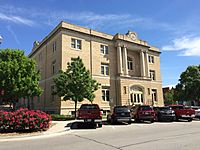 For the first 125 years of its history, McKinney served as the principal commercial center for the county. The county seat provided farmers with flour, corn, and cotton mills, cotton gins, a cotton compress, and a cottonseed oil mill, as well as banks, churches, schools, newspapers, and from the 1880s, an opera house. Businesses also came to include a textile mill, an ice company, a large dairy, and a garment-manufacturing company. The population grew from 35 in 1848 to 4,714 in 1912. By 1953, McKinney had a population of more than 10,000 and 355 businesses. The town continued to serve as an agribusiness center for the county until the late 1960s.

Both the city and the county were named for Collin McKinney, signer of the Texas Declaration of Independence, and a congressman for the Red River district of the Republic of Texas. He was the author of a bill establishing counties in the northern part of the state.

McKinney is considered part of the humid subtropical region.

It is also part of the Texas blackland prairies, which means it gets hot summers because it is in the Sun Belt. Humidity makes temperatures feel higher, and winters are mild and are usually rainy, snowstorms occasionally occur. Spring is the wettest part of the year, which brings winds from the Gulf Coast.

All content from Kiddle encyclopedia articles (including the article images and facts) can be freely used under Attribution-ShareAlike license, unless stated otherwise. Cite this article:
McKinney, Texas Facts for Kids. Kiddle Encyclopedia.