Carrollton is a city in Denton County, Dallas County and Collin County, Texas. As of the 2010 census, its population was 119,097 making it the twenty-third most populous city in Texas.

The area was first settled by Jared Ford in 1842 by William and Mary Larner on a site within the Peters Colony grant. In 1844, the A. W. Perry family claimed land in the area around Trinity Mills, where, in partnership with Wade H. Witt, a mill was established.

The English colony, a group of families in the northeastern area of settlement which crossed into Denton County, was home to large landowners including the Furneaux, Jackson, Morgan, and Rowe families. It is most likely that Carrollton was named for Carrollton, Illinois, the original home of many of these settlers.

Early on, Carrollton's livelihood was exclusively agricultural, but following the construction of the Dallas-Wichita Railroad through Trinity Mills in 1878, the community began to grow in its industrial significance. Carrollton's significance was further strengthened when the railroad was extended to Denton in 1880 by Jay Gould, who sold the line to the Missouri–Kansas–Texas Railroad (the Katy) in 1881. By 1885, Carrollton had flour mills, cotton gins, two churches, a school, and a population of 150. The St. Louis Southwestern Railway (the "Cotton Belt") crossed the Katy in 1888, and the town became a shipping center for livestock, cotton, cotton seed, and grain, helping the town surpass Trinity Mills to the north.

In 1913 Carrollton was officially incorporated, and W.F. Vinson was elected mayor. A gravel industry that began in Carrollton in 1912 transformed the city, by the late 1940s, to a "grain and gravel" town. The city also supported a brick plant and a dairy industry, and National Metal Products established itself in the city in 1946. 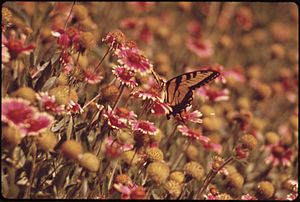 All content from Kiddle encyclopedia articles (including the article images and facts) can be freely used under Attribution-ShareAlike license, unless stated otherwise. Cite this article:
Carrollton, Texas Facts for Kids. Kiddle Encyclopedia.