Abilene ( AB-i-LEEN) is a city in Taylor and Jones counties in West Texas, United States. The population was 117,063 according to the 2010 census, making it the 27th-most populous city in the state of Texas. It is the principal city of the Abilene Metropolitan Statistical Area, which had a 2011 estimated population of 166,416. It is the county seat of Taylor County. Dyess Air Force Base is located on the west side of the city.

Abilene is located off Interstate 20, between exits 279 on its western edge and 292 on the east. Abilene is 150 miles (240 km) west of Fort Worth, Texas. The city is looped by I-20 to the north, US 83/84 on the west, and Loop 322 to the east. A railroad divides the city down the center into north and south. The historic downtown area is on the north side of the railroad.

The fastest-growing sections of the city are growing to the southwest, along Southwest Drive, the Winters Freeway, and the Buffalo Gap Road corridor; the southeast, along Loop 322, Oldham Lane, Industrial Drive, and Maple Street; and in the northeast near the intersection of SH 351 and I-20. Many developments have begun in these three areas within the last few years. Three lakes are in the city, Lytle Lake on the western edge of Abilene Regional Airport, Kirby Lake on the southeast corner of the US 83/84 and Loop 322 interchange, and Lake Fort Phantom Hill in Jones County in northern Abilene. 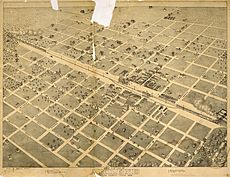 The 20-story Bank of America Enterprise Tower is the tallest building in west-central Texas and one of the five highest in the western two-thirds of the state.

Established by cattlemen as a stock shipping point on the Texas and Pacific Railway in 1881, the city was named after Abilene, Kansas, the original endpoint for the Chisholm Trail. The T&P had bypassed the town of Buffalo Gap, the county seat at the time. Eventually, a landowner north of Buffalo Gap, Clabe Merchant, known as the father of Abilene, chose the name for the new town. According to a Dallas newspaper, about 800 people had already begun camping at the townsite, before the lots were sold. The town was laid out by Colonel J. Stoddard Johnson, and the auction of lots began early on March 15, 1881. By the end of the first day, 139 lots were sold for a total of $23,810, and another 178 lots were sold the next day for $27,550.

Abilene was incorporated soon after being founded in 1881, and Abilenians began to set their sights on bringing the county seat to Abilene, and in a three-to-one vote, won the election. In 1888, the Progressive Committee was formed to attract businesses to the area, which later became the Board of Trade in 1890. By 1900, 3,411 people lived in Abilene, and in that decade, the Board of Trade changed its name to the 25,000 Club in the hope of reaching 25,000 people by the next census. However, this committee failed when the population only hit 9,204 in 1910. Replacing it was the Young Men's Booster Club, which became the Abilene Chamber of Commerce in 1914.

The cornerstone was laid for the first of three future universities in Abilene, called Simmons College, in 1891, which later became Hardin-Simmons University. Childers Classical Institute followed in 1906, currently Abilene Christian University, the largest of the three. In 1923, McMurry College was founded and later became McMurry University. Much more recently, Abilene succeeded in bringing Cisco Junior College and Texas State Technical College branches to Abilene, with the Cisco Junior College headquarters being located in Abilene.

In 1940, Abilene raised the money to purchase land for a U.S. Army base, southwest of town, named Camp Barkeley, which was at the time, twice the size of Abilene with 60,000 men. When the base closed, many worried that Abilene could become a ghost town, but in the post-World War II boom, many servicemen returned to start businesses in Abilene. In the early-1950s, residents raised $893,261 to purchase 3,400 acres (14 km2) of land for an air force base. Today, Dyess Air Force Base is the city's largest employer, with 6,076 employees. By 1960, Abilene's population nearly doubled in 10 years from 45,570 in 1950 to 90,638. In the same year, a second high school was added, Cooper High School. In 1966, the Abilene Zoo was created near Abilene Regional Airport. The following year, one of the most important bond elections in the city's history passed for the funding of the construction of the Abilene Civic Center and the Taylor County Coliseum, as well as major improvements to Abilene Regional Airport. In 1969, the Woodson elementary and high school for black students closed as the schools are integrated.

In 1982, Abilene became the first city in Texas to create a downtown reinvestment zone. Texas State Technical College opened an Abilene branch three years later. The 2,250-bed French Robertson Prison Unit was built in 1989. A half-cent sales tax earmarked for economic development was created after the decline in the petroleum business in the 1980s. The Grace Museum and Paramount Theatre revitalizations, along with Artwalk in 1992, sparked a decade of downtown restoration. In 2004, Frontier Texas!, a multimedia museum highlighting the history of the area from 1780 to 1880 was constructed, and a new $8 million, 38-acre (150,000 m2) Cisco Junior College campus was built at Loop 322 and Industrial Boulevard. Simultaneously, subdivisions and businesses started locating along the freeway, on the same side as the CJC campus, showing a slow but progressive trend for Abilene growth on the Loop. Abilene has become the commercial, retail, medical, and transportation hub of a 19-county area more commonly known as "The Big Country", but also known as the "Texas Midwest", and is part of the Central Great Plains ecology region. By the end of 2005, commercial and residential development had reached record levels in and around the city.

According to the Köppen climate classification, Abilene lies at the edge of a humid subtropical climate, with areas to the west being semiarid.

The many historical buildings in Abilene include:

An Abilene dwelling has an indirect link to Hollywood actress Joan Crawford: her father, Thomas LeSeur, was a construction laborer on the George R. Davis House at 718 Victoria Street, built in 1930 in Prairie School architecture.

The cultural aspects of Abilene center around a mix of the local college and university campuses, the agriculture community of the surrounding area, and the numerous evangelical churches present. The Abilene Arts Alliance captured the essence of the city with "Frontiering", a brand name for the city introduced in November 2008 to connect its pioneer spirit with its modern efforts to push the boundaries of education, technology, transportation, energy, the arts, and health care. Abilene is also home to the restored Paramount Theatre, The Abilene Philharmonic, The Grace Museum, the Center for Contemporary Arts, the National Center for Children's Illustrated Literature, The Abilene Zoo, Frontier Texas!, the 12th Armored Division Museum, Taylor County Coliseum, six libraries (three private, three public), 26 public parks, six television stations, and several radio stations, including one NPR station (89.5 KACU).

The Abilene park system includes 29 parks, occupying a total of 1,247.56 acres (5.0487 km2). In addition, three athletic complexes located throughout the city are under the jurisdiction of the parks department. 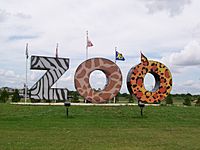 The Abilene Zoo is a popular attraction in Abilene, boasting several hundred animals of various species. It hosts educational and summer programs, as well as special events throughout the year.

On every second Thursday evening of the month, Artwalk is held in downtown Abilene. During Artwalk, all the local museums are free, local musicians and performers busk, and several crafters and artists set up booths and sell their wares.

Several special-interest conventions, festivals, and shows are scattered throughout the year, including the Abilene Gem and Mineral Show, the West Texas Book and Music Festival, the Abilene Gun and Knife Show, and the Friends of the Abilene Public Library book sale.

Also of note is the annual Abilene High vs. Cooper High football game, the Crosstown Showdown, usually held near Halloween. Two of these games, in 2001 and 2002, were for the district championship and were called the "Showdown at Shotwell" as games were played at Shotwell Stadium. 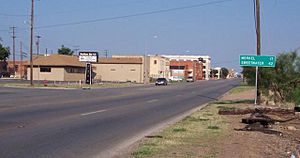 A section of Interstate 20 (formerly US 80) in Abilene

The city of Abilene is served by Abilene Regional Airport.

All content from Kiddle encyclopedia articles (including the article images and facts) can be freely used under Attribution-ShareAlike license, unless stated otherwise. Cite this article:
Abilene, Texas Facts for Kids. Kiddle Encyclopedia.