Abilene zoo has been an accredited member of the Association of Zoos and Aquariums (AZA) since 1985. The zoo participates in the AZA Reciprocal Admissions Program, allowing members to obtain free or reduced admissions at many other American zoos.

The zoo is primarily funded by the City of Abilene and the Abilene Zoological Society. 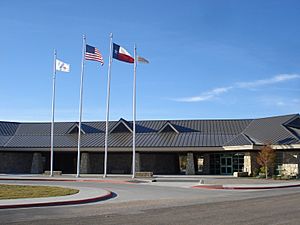 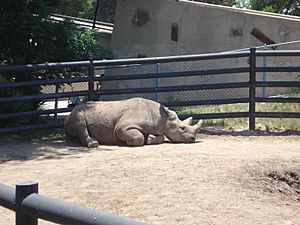 One of Abilene's two black rhinos

In 1985, the zoo first received accreditation from the Association of Zoos and Aquariums (AZA).

In 2006, $1.1 million was raised through a bond issue for zoo improvements. This bond funded converting part of the Discovery Center into the Creepy Crawly Center, expansions to the giraffe exhibit and the parking lot, and creating a South American Trails exhibit, the Wetlands Boardwalk, and the Elm Creek Backyard exhibit.

In 2007, one of the zoos elephants died at age 49 amidst some controversy over conditions for the elephants at the zoo, and the other was sent to the Cameron Park Zoo in Waco, Texas. The elephant exhibit was then turned into an exhibit for black rhinoceroses. The new $3.7 million Adventure Center (visitor services, administration, and education, all privately funded) and the new Creepy Crawler Center were also opened in 2007.

In 2008, the zoo saw the opening of the maned wolf exhibit, which was initially home to a mother and son acquired from the Wild Canid Survival and Research Center in Eureka, Missouri.

In June 2009, the zoo received an 8 year old white Bengal tiger named Havar from Busch Gardens Tampa Bay in Florida. The 325 pound male tiger went on display 2 June 2009. Also in 2009, the Elm Creek Backyard exhibit was completed with funds from the 2006 bond issue plus a $525,000 grant from the Grover Nelson Foundation. In 2013, a new Caribbean Cove section opened, featuring exotic birds, reptiles, and mammals from Caribbean countries.

In March 2009, extension of the AZA accreditation for the zoo was tabled. In November, the majority of the issues had been addressed, including the lack of adequate veterinary and quarantine facilities. In March 2010, the zoo's accreditation was extended through 2014. In March 2014, the AZA once granted accreditation without any reservations.

This exhibit includes a bridge crossing over it which allows visitors to pet and feed the giraffes. Construction began on a new $3.8 million Giraffe Safari exhibit, and opened in April 2016. The new exhibit doubled the size of the old habitat, and includes the zoo's new male giraffe and two females.

This exhibit displays wildlife from South America, such as macaws, monkeys, and assorted amphibians. It also includes a large sand area for kids, while their parents take a break at the nearby tables and chairs.

The zoo's herpetarium, opened in December 2007 in what was part of the Discovery Center. The exhibit was designed and built by the zoo's management and staff, and contains 50 naturalistic exhibits with 80 species of reptiles and amphibians. 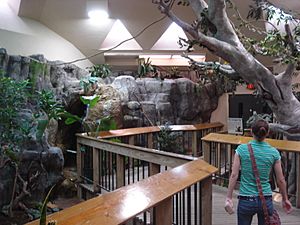 Also part of the Discovery center, the Tropical Aviary is a climate controlled indoor aviary that is home to the zoos tropical birds. The zoo also has Bird Gardens which house other birds in its possession.

Completed in 2009, this area houses species native to the Elm Creek area of Texas, including cougars, coyotes, porcupines, raccoons, bobcats, ringtails, armadillos, skunks, and river otters, as well as a some birds, fish, reptiles, and amphibians. 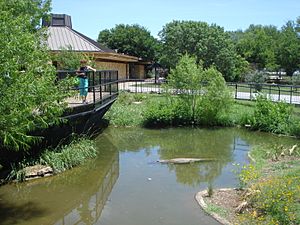 Wetlands of the Americas

An elevated boardwalk that lets visitors get a close look at animals that inhabit the wetlands exhibits at the zoo. The various wetlands exhibits are home to a variety of wetland dwellers including alligators, flamingos, waterfowl, and Attwater's prairie chicken.

This $300,000 project opened in March 2018. As soon as guests walk through the gate, they'll see this new exhibit, which houses African birds: lesser flamingos and yellow-billed ducks.

The Adventure Center, which opened in 2007, is a 12,000-square-foot (1,115 m2) complex that includes admissions, customer relations, and a gift shop, as well as administrative offices and classrooms that can hold up to 150 people.

The current master plan, developed by Wichita, Kansas-based WDM Architects for the zoo, includes an Africa project, to be built on 24 acres (9.7 ha) of undeveloped zoo property to the North of the current zoo at an estimated cost of $20 million.

Construction has begun on a new Giraffe Safari exhibit at the heart of the zoo. The new exhibit will include a large feeding deck to allow guests to interact with the animals. The larger space allowed for the acquisition of a bull giraffe in October 2014. He will be on exhibit with two females in spring 2016, when the new exhibit opens.

All content from Kiddle encyclopedia articles (including the article images and facts) can be freely used under Attribution-ShareAlike license, unless stated otherwise. Cite this article:
Abilene Zoological Gardens Facts for Kids. Kiddle Encyclopedia.