The Paramount Theatre is located in downtown Abilene, Texas at 352 Cypress Street.

The Paramount was built in 1930 by H. O. Wooten, adjacent to his Hotel Wooten. Opening night was May 19, 1930, with the film, Safety in Numbers starring Carole Lombard. On February 12, 1931, Universal Pictures selected the Abilene Paramount, along with a few others in that theatre chain, to exhibit the 1931 horror classic Dracula, a full two days before its Valentine's Day premiere. Restored to its current state in 1986, the Paramount features: films, live theatre performances, 1,189 split-aisle seats, Spanish-Moorish interior, and a domed ceiling with moving clouds and glittering stars.

The theatre also produces live theatre. In 1993, the Paramount began putting together the annual Paramount Summer Musical. Every summer, for decades the theatre has put on productions casting local amateur actors, and employing some of the best musicians, choreographers, set designers, and costumers from the area. The theatre has also worked closely with all three local university theatre departments. In 2003, the Paramount began an annual children's show each January. And in 2016 the theatre began staging a play each September.

The Paramount is best known, though, as a movie house. The annual Paramount Film Series has shown hundreds of films since the relaunch of the theatre in 1987. In 2019, over 14,000 people came to see a movie at the Paramount. 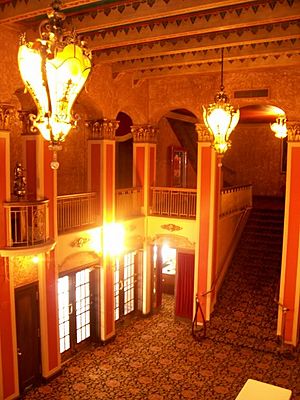 All content from Kiddle encyclopedia articles (including the article images and facts) can be freely used under Attribution-ShareAlike license, unless stated otherwise. Cite this article:
Paramount Theatre (Abilene, Texas) Facts for Kids. Kiddle Encyclopedia.