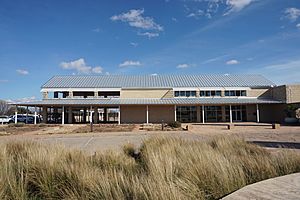 Frontier Texas! is a 14,000-square-foot (1,300 m2) museum of the American West in downtown Abilene, the seat of Taylor County in West Texas. The museum serves as a visitors information center for the Texas Forts Trail, one of ten Texas Historical Commission driving regions. Opened in 2004 at 625 North First Street on 6.4 acres (26,000 m2) near the Texas and Pacific Railway tracks, the museum focuses on settlers and lifestyles in the Old West. Exhibits display attacks by Indians and wolves, stampeding buffalo, a card game shootout, and a prairie thunderstorm. Visitors see depictions of buffalo hunters, Comanche warriors, explorers, and pioneers in the theatre called the "Century of Adventure", 1780-1880. The narrator in the theater is actor-artist Buck Taylor from Fort Worth.

In July 2013, the museum was featured on the syndicated anthology television series Texas Country Reporter, with host Bob Phillips. The episode focuses upon eight weather vanes in the shape of bison recently installed in the museum courtyard. 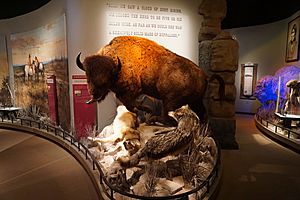 The museum offers lesson plans at elementary and secondary levels for Texas and United States history . The museum publishes a quarterly newsletter called Frontier Times. There is a gift shop called the General Store that offers books, toys, housewares, and clothing.

All content from Kiddle encyclopedia articles (including the article images and facts) can be freely used under Attribution-ShareAlike license, unless stated otherwise. Cite this article:
Frontier Texas! Facts for Kids. Kiddle Encyclopedia.