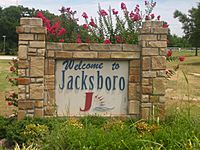 Jacksboro is a city in Jack County, Texas, in the United States. The population was 4,511 at the 2010 census. Jacksboro is located at the junction of U.S. Highways 281 and 380, and it is the county seat of Jack County.

Jacksboro was first settled in the 1850s, attracted by land offers from the Texas Emigration and Land Office. Originally called Mesquiteville, the community grew up along the banks of Lost Creek and spread out over the pastureland between Lost Creek and the waters of the West Fork of Keechi Creek. It was renamed Jacksboro in 1858 when it became the county seat, in honor of brothers William and Patrick Jack, veterans of the Texas Revolution. Regular postal service began in 1859.

The county was one of the few to vote against secession before the Civil War . It was devastated by Native American raids until Fort Richardson was built south of Jacksboro in 1870. The population quickly bounced back into the thousands, and the town gained national attention in 1871 when two Kiowa chiefs, Satanta and Big Tree, were tried for murder there.

The Chicago and Rock Island Railroad arrived in 1898, and increased the town's commercial importance to the surrounding region, as did the completion of highways and other roads later on.

It is near Fort Richardson State Historical Park. Jacksboro stakes a claim to having the first state 4-H club, formed in the 1910s in Jacksboro.

There were 1,382 households out of which 33.7% had children under the age of 18 living with them, 53.7% were married couples living together, 11.7% had a female householder with no husband present, and 30.9% were non-families. 28.4% of all households were made up of individuals and 16.3% had someone living alone who was 65 years of age or older. The average household size was 2.50 and the average family size was 3.06.

The climate in this area is characterized by hot, humid summers and generally mild to cool winters. According to the Köppen Climate Classification system, Jacksboro has a humid subtropical climate, abbreviated "Cfa" on climate maps.

All content from Kiddle encyclopedia articles (including the article images and facts) can be freely used under Attribution-ShareAlike license, unless stated otherwise. Cite this article:
Jacksboro, Texas Facts for Kids. Kiddle Encyclopedia.