Graham is a city in north-central Texas. It is the county seat and largest city of Young County, and as of the 2010 Census, had a population of 8,903.

The site was first settled in 1871 by brothers Gustavus A. and Edwin S. Graham, primary shareholders in the Texas Emigration and Land Company of Louisville, Kentucky. The brothers moved to Texas after the Civil War, and after buying 125,000 acres (510 km2) in then-vast Young County, helped to revitalize the area, the population of which had become badly depleted during the war. During that same year as when Graham was settled, the Warren Wagon Train Raid occurred about 12 miles north of the city. In 1872 the Graham brothers purchased a local saltworks and established the town of Graham and set up the Graham Land Office. The saltworks was not a profitable venture as the salt was too expensive to ship and was closed in a few years.

New families started to arrive, and the brothers began promoting the sale of homesites and doing civic improvements. A post office opened in 1873, and after Young County reorganized the following year, Graham became the county seat. The town's newspaper, known as the Leader and still in existence today, was first printed in 1876, the same year that the first temporary courthouse was built. Other businesses from these early years included a gristmill, sawmill, cotton gin, a brick kiln, two hotels, and several stores.

On February 15, 1877 the city was the site of the organizational meeting of the group that became the Texas and Southwestern Cattle Raisers Association, created to police ranching and put a stop to cattle rustling. Founding officers included pioneer ranchers James C. Loving (son of Oliver Loving), Col. C. L. (Kit) Carter, and C.C. Slaughter. A three-story limestone courthouse was built in 1884, and it was replaced by a new courthouse in the early 1930s. The 1884 structure's east door still stands on the courthouse square. From 1879-1896, Graham was the seat of a Federal District Court overseen by Judge A.P. McCormick; his jurisdiction extended over all of Texas north and west to New Mexico.

Edwin Graham had married Addie Mary Kintner in 1865. They had five children. Throughout the 1870s they divided their time between Texas and their families back north, but in 1879, with the town flourishing, they moved their wives and children to Graham permanently. Edwin and Addie lived there until 1891, then moved to Spokane, Washington, where Edwin died on May 7, 1899. His body was brought back to Graham for burial. Addie moved back to Graham and became a leading civic booster and philanthropist. In 1921, with her son Malcolm, she set up the Graham Foundation as a continuing fund for the city's growth and improvement. Addie died in 1929 and was responsible for the establishment of the Eden Home for the aged.

By 1900, Graham had incorporated as a town, and railroad service began in 1903, through the Wichita Falls and Southern Railroad, which in 1921 became the Wichita Falls and Southern Railroad, one of the Frank Kell and Joseph A. Kemp properties. It was later a stop on the since defunct Chicago, Rock Island and Texas, which reached Graham from Fort Worth.

According to a mural on the courthouse depicting the arrival of the Graham brothers, the town square is physically the largest of any in the country.

Graham is also one of only a handful of towns in Texas that remains a Dry County and still has an operational drive-in theater. 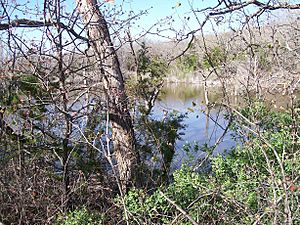 There are three public boat ramps, one fishing pier, a picnic area, and sites for primitive and improved camping. There are no boat rentals, no marina, and no handicap fishing access. A bait shop is located about two miles south of the reservoir on US 380. Shore fishing is limited to the area around the boat ramp on the Eddleman portion of the reservoir and along the US 380 causeways.

The Twin Mountains is the dominant physical landmark of the city.

Public schools in the City of Graham are managed by the Graham Independent School District and home to the Graham High School Steers.

All content from Kiddle encyclopedia articles (including the article images and facts) can be freely used under Attribution-ShareAlike license, unless stated otherwise. Cite this article:
Graham, Texas Facts for Kids. Kiddle Encyclopedia.