Henrietta is a city in and the county seat of Clay County, Texas, United States. It is part of the Wichita Falls, Texas Metropolitan Statistical Area. The population was 3,141 at the 2010 census, a decline of 123 from the 2000 tabulation of 3,264.

U.S. Route 287 has long been a key traffic artery in Henrietta. 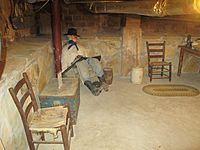 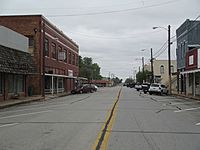 A portion of Henrietta 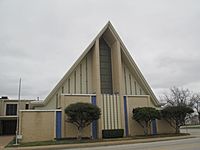 Clay and Montague counties were separated in 1857 from Cooke County to the east, and Henrietta was named as the county seat. The naming of the town remains a mystery, though several explanations have been offered. Regardless of the origin of its name, Henrietta became the center of gravity for the fledgling county. In 1860, as the only town in the county, it had 109 residents, 10 houses, and a general store. It sat at the far western edge of Anglo expansion in north-central Texas, but Native Americans remained a viable threat to current and future settlers. In 1862, Henrietta opened its post office. In the early 1860s, there were continuous attacks from local tribes. By late 1862, Henrietta was abandoned, and white settlers returned east to Cooke and Montague counties. Remaining structures were burned. Anglos continued to attempt resettlement, and in 1865 after the Civil War, a group attempting resettlement was massacred. A number of Quakers attempted to reoccupy the former townsite, but its members were either killed or fled. In 1870, fifty soldiers and Kiowa Indians fought a battle in the ruins of Henrietta.

After the battle, white settlers returned to Henrietta, this time permanently. In 1874, the post office reopened, and Henrietta quickly became the economic hub of north-central Texas. In 1882, the Fort Worth and Denver Railway reached Henrietta on its southern side, and in 1887, Henrietta became the westernmost terminus for the Gainesville, Henrietta, and Western Railway.

In 1895, the Wichita Falls Railway, one of the properties of Joseph A. Kemp and Frank Kell, linked Henrietta with Wichita Falls; sold in 1911, this 18-mile (29 km) segment was operated thereafter by the Missouri-Kansas-Texas Railroad, known as the Katy. This particular track was abandoned in 1970. MK&T then built in Wichita Falls a station, offices, a roundhouse, and three switching tracks.

After heavy lobbying by businessmen, Henrietta became a logistical supply point for various operations in north-central Texas, including mining in Foard and Archer counties. The Southwestern Railway Company in 1910 completed a rail linking Henrietta with Archer City. 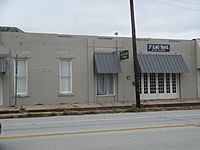 An antiques shop occupies part of the building which once housed the St. Elmo Hotel, long ago destroyed in a fire. 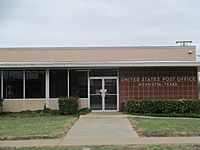 The U.S. Post Office is located in the southeast corner of Courthouse Square in Henrietta.

Though it had been settled earlier, Henrietta did not incorporate until 1881. The Clay County courthouse was built in 1884 and is still in use. By 1890, the population had reached 2,100, and the town boasted a 400-seat opera house, five churches, a new jailhouse, and a school. From 1893 to 1895, it had a college - Henrietta Normal College - for the training of teachers. It remained the economic hub of the county at the turn of the 20th century.

The St. Elmo Hotel, established about 1895 in Henrietta, had among its guests Quanah Parker, who married two of his wives there, and U.S. President Theodore Roosevelt, when he toured the North Texas area. When the top floors of the hotel burned, the facility closed and never reopened. A portion of the lower floor now houses an antiques store.

The growth of Henrietta waned in the 20th century as Wichita Falls grew rapidly into the most prosperous economic center in the area. The Southwestern Railway line was abandoned in 1920, and the Gainesville, Henrietta, and Western Railway line closed in 1969. By 1990, the population remained under 3,000. In 2000, it topped 3,000 for the first time since the 1970 census. In many ways, Henrietta is a "bedroom community" for Wichita Falls but is still the largest city in Clay County.

The play Texas presented during summers at the Palo Duro Canyon near Amarillo is loosely based on the history of Henrietta.

The 1995 film, The Stars Fell on Henrietta, produced by Clint Eastwood and David Valdez, and starring Robert Duvall, Brian Dennehy and Billy Bob Thornton, depicts the Texas oil rush of the 1930s and is set in Henrietta.

There were 1,308 households out of which 33.3% had children under the age of 18 living with them, 55.4% were married couples living together, 9.8% had a female householder with no husband present, and 31.7% were non-families. 29.1% of all households were made up of individuals and 17.5% had someone living alone who was 65 years of age or older. The average household size was 2.43 and the average family size was 3.01.

The climate in this area is characterized by hot, humid summers and generally mild to cool winters. According to the Köppen Climate Classification system, Henrietta has a humid subtropical climate, abbreviated "Cfa" on climate maps.

All content from Kiddle encyclopedia articles (including the article images and facts) can be freely used under Attribution-ShareAlike license, unless stated otherwise. Cite this article:
Henrietta, Texas Facts for Kids. Kiddle Encyclopedia.