The city of Lawton is the county seat of Comanche County, in the State of Oklahoma. Located in southwestern Oklahoma, about 87 mi (140 km) southwest of Oklahoma City, it is the principal city of the Lawton, Oklahoma Metropolitan Statistical Area. According to the 2010 census, Lawton's population was 96,867, making it the fifth-largest city in the state.

Built on former reservation lands of Kiowa, Comanche, and Apache Indians, Lawton was founded on August 6, 1901, and was named after Major General Henry Ware Lawton, a Civil War Medal of Honor recipient killed in action in the Philippine–American War. Lawton's landscape is typical of the Great Plains, with flat topography and gently rolling hills, while the area north of the city is marked by the Wichita Mountains.

The city's proximity to Fort Sill Military Reservation gave Lawton economic and population stability throughout the 20th century. Although Lawton's economy is still largely dependent on Fort Sill, it has also grown to encompass manufacturing, higher education, health care, and retail. The city's government is run by a council-manager government consisting of a city manager and a city council headed by a mayor. Interstate 44 and three major United States highways serve the city, while Lawton-Fort Sill Regional Airport connects Lawton by air. Recreation can be found at the city's many parks, lakes, museums, and festivals. Notable residents of the city include many musical and literary artists, as well as several professional athletes.

The land that is present-day Oklahoma was first settled by prehistoric American Indians including the Clovis 11500 BCE, Folsom 10600 BCE and Plainview 10000 BCE cultures. Historic indigenous peoples who inhabited the region included the Wichita and Caddo peoples. In the 16th century, Spanish explorer Francisco Vásquez de Coronado visited in 1541, beginning European contact. Around the 1700s, two tribes from the north, the Comanches and Kiowas, migrated to the Oklahoma and Texas region.

For most of the 18th century, the Oklahoma region was under nominal French control as Louisiana. The limited interaction between the peoples was based on fur trading. In 1803, the Louisiana Purchase by Thomas Jefferson brought the area under United States control. In 1830, Congress passed the Indian Removal Act, which removed American Indian tribes from the Southeast and relocated them to Indian Territory west of the Mississippi River. The southern part of this territory was originally assigned to the Choctaw and Chickasaw. In 1867, the United States used the Medicine Lodge Treaty to allot the southwest portion of the Choctaw and Chickasaw’s lands to the Comanche, Kiowa, and Apache tribes.

Fort Sill was established in 1869 after the American Civil War by Major General Philip Sheridan, who was leading a campaign in the Indian Territory to stop raids into Texas by American Indian tribes. In 1874, the Red River War broke out in the region when the Comanche, Kiowa, and Southern Cheyenne left their Indian Territory reservation. Attrition and skirmishes by the US Army finally forced the return of the tribes back to Indian Territory in June 1875.

In 1891, the United States Congress appointed a commission to meet with the tribal leaders and come to an agreement allowing white settlement. Years of controversy and legal maneuvering ensued before President William McKinley issued a proclamation on July 4, 1901, that gave the federal government control over 2,000,000 acres (8,100 km2) of surplus Indian land. Under other legislation, the United States through the Dawes Commission allotted communal lands as plots to individual households of tribal members, selling off what remained as "surplus." These actions extinguished the tribal claims to communal lands, a condition needed for the admission of Oklahoma as a state in 1907. 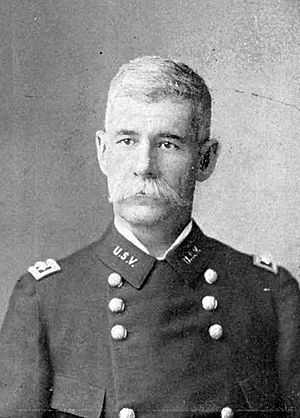 After these changes, the legislature of the new state began to organize counties. Three 320-acre sites in Kiowa, Caddo and Comanche counties were selected for county seats, with Lawton designated as the Comanche County seat. The town was named for Major General Henry W. Lawton, a quartermaster at Fort Sill, who had taken part in the pursuit and capture of Geronimo. The city was opened to settlement through an auction of town lots beginning on August 6, 1901, which was completed 60 days later. By September 25, 1901, the Rock Island Railroad expanded to Lawton and was soon joined by the Frisco Line. The first city elections were held October 24, 1901.

The United States' entry into World War I accelerated growth at Fort Sill and Lawton. The availability of 5 million US gallons (19,000 m3) of water from Lake Lawtonka, just north of Fort Sill, was a catalyst for the War Department to establish a major cantonment named Camp Doniphan, which was active until 1922. Following World War II, Lawton enjoyed steady population growth, with the population increasing from 18,055 to 34,757 from 1940 to 1950. By the 1960s, it had reached 61,697.

In the postwar period, Lawton underwent tremendous growth during the late 1940s and 1950s, leading city officials to seek additional water sources to supplement existing water from Lake Lawtonka. In the late 1950s, the city purchased large parcels of land along East Cache Creek in northern Comanche County for the construction of a man-made lake with a dam built in 1959 on the creek just north of U.S. 277 west of Elgin. Lake Ellsworth, named for a former Lawton mayor, soft-drink bottler C.R. Ellsworth, was dedicated in the early 1960s. It offered additional water resources, but also recreational opportunities and flood control along Cache Creek.

In 1966, the Lawton City Council annexed several miles of land on the city's east, northeast, west, and northwest borders, expanding east beyond the East Cache Creek area and west to 82nd Street. On March 1, 1964, the north section of the H. E. Bailey Turnpike was completed, connecting Lawton directly to Oklahoma City, the capital. The south section of the turnpike leading to the Texas border was completed on April 23, 1964. Urban renewal efforts in the 1970s transformed downtown Lawton. A number of buildings dating to the city's founding were demolished to build an enclosed shopping mall.

On June 23, 1998, the city expanded when Lawton annexed neighboring Fort Sill. With the advent of the Base Realignment and Closure of 2005 increasing the size of Fort Sill, Lawton is expected to see continued population and economic growth over the course of the next 20 years.

Lawton lies in an area typical of the Great Plains, with prairie, few trees, and flat topography with gently rolling hills. The region north of the city consists of the Wichita Mountains, including Mount Scott and Mount Pinchot, the area's highest peaks. The area consists mostly of Permian Post Oak Conglomerate limestone on the northern sections of the city. In the south sections of the city, Permian Garber sandstone is commonly found with some Hennessey Group shale. Area creeks including East Cache Creek contain deposits of Quaternary alluvium. To the northwest, the Wichita Mountains consist primarily of Wichita Granite Group from the Cambrian era.

Lawton lies in a dry subtropical climate (Köppen climate classification Cfa), with frequent variations in weather daily, except during the constantly hot and dry summer months. Frequent strong winds, usually from the south or south-southeast during the summer, help to lessen the hotter weather. Northerly winds during the winter can occasionally intensify cold periods.

The average mean temperature for the southwest Oklahoma is 61.9 °F (16.6 °C). The summers can be extremely hot; Lawton averages 21 days with temperatures 100 °F (37.8 °C) and above. The winter months are typically mild, though periods of extreme cold can occur. Lawton averages eight days that fail to rise above freezing. The city receives about 31.6 inches (800 mm) of precipitation and less than 3 in (80 mm) of snow annually.

Lawton is located squarely in the area known as Tornado Alley and is prone to severe weather from late April through early June. Most notably, an F4 tornado in 1957, and an F3 tornado in 1979 struck the southern region of the city.

Lawton is primarily centered on government, manufacturing, and retail trade industries. Lawton MSA ranks fourth in Oklahoma with a gross domestic product of $4.2 billion produced in 2008, with a majority ($2.1 billion) in the government sector. Fort Sill is the largest employer in Lawton, with over 5,000 full-time employees. In the private sector, the largest employer is Goodyear Tire and Rubber Company with 2,400 full-time employees. Major employers in the Lawton area also include: Lawton Public Schools, Comanche County Memorial Hospital, City of Lawton, and Cameron University. Lawton includes two major industrial parks. One is located in the southwest region of town, while the second is located near the Lawton-Fort Sill Regional Airport.

At present, the city of Lawton is undertaking the Downtown Revitalization Project. Its goal is to redesign the areas between Elmer Thomas Park at the north through Central Mall to the south to be more visually appealing and pedestrian friendly to encourage business growth in the area.

Lawton is home to many annual attractions, including the Prince of Peace Easter passion play held in the Holy City in the Wichita Mountain Refuge each year on Palm Sunday, continuing to Easter Eve. It continues to be one of the longest-running Easter passion plays in the nation and was the basis for the 1949 movie The Prince of Peace. The passion play was also featured in a documentary called Jesus Town, USA which focuses on a new actor portraying the role of Jesus after the former actor of 8 years retired from the role. The documentary is light-hearted and amusing, but turns slightly serious when he announces to the camera that he had become a Buddhist. He struggles with the decision to tell his fellow castmates and family about his rejection of the Christian church. Many folks are upset about his decision, but he is allowed to continue in the role of Jesus despite his faith.

In May, Lawton Arts for All, Inc hosts the Arts for All Festival. The festival accommodates several judged art competitions, as well as live entertainment. The festival is typically held at Shepler Park. In late September, The International Festival is held in the city. Founded in 1979, the event showcases the many different culture, arts, and music of the community.

Lawton has three public museums. The Museum of the Great Plains is dedicated to natural history and early settlement of the Great Plains. Outdoor exhibits include a replica of the Red River Trading Post, the original Blue Beaver schoolhouse, and Elgin Train Depot with a Frisco locomotive. The Fort Sill Museum, located on the military base of the same name, includes the old Fort Sill corral and several period buildings, including the old post guardhouse, chapel, and barracks, as well as several artillery pieces. The old fort is also designated as a National Historic Landmark. The Comanche National Museum and Cultural Center, operated by the Comanche Nation Tribe, focuses on exhibits and art relating to the Comanche culture past and present. The museum also hosts traveling American Indian exhibitions from the Smithsonian Institution, Michigan State University Museum, and Chicago's Field Museum. 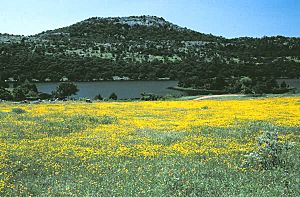 A view of Mt Scott

Lawton is home to 80 parks and recreation areas in varying sizes, including the largest Elmer Thomas Park. Along with the park system, the city is near three major lakes, Lake Lawtonka, Lake Ellsworth, and Elmer Thomas Lake, where boating, swimming, camping, and fishing are permitted. The Lawton branch of the Young Men's Christian Association (YMCA) offers a wide variety of recreational programs to members, and the Lawton Country Club maintains an 18-hole, par 71 golf course. Recreation can also be found in many amateur leagues, including: adult softball, youth baseball, soccer, softball, and volleyball.

Northwest of the city is the Wichita Mountains Wildlife Refuge, managed by the US Fish and Wildlife Service to preserve the natural fauna of southwest Oklahoma. The refuge includes a Visitor Center, several camping areas, hiking trails, and many lakes for the public to explore.

All content from Kiddle encyclopedia articles (including the article images and facts) can be freely used under Attribution-ShareAlike license, unless stated otherwise. Cite this article:
Lawton, Oklahoma Facts for Kids. Kiddle Encyclopedia.