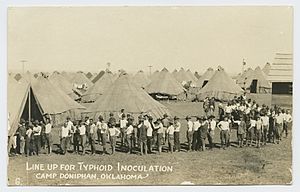 Camp Doniphan was a military base adjacent to Fort Sill, just outside Lawton, in Comanche County, Oklahoma, that was activated for use in World War I for artillery training. The post was closed in 1918 and incorporated into Fort Sill.

The camp was named for Alexander William Doniphan, a hero of the Mexican–American War from the Missouri Volunteers of Northwestern Missouri. It was from this camp that thousands of soldiers, from Oklahoma, Kansas and Missouri, were given basic training prior to being sent to Camp Mills, Mineola, Long Island, New York; Philadelphia, Pennsylvania; or Camp Merritt, Dumont, New Jersey, for embarkation to France. The camp contained 1,267 buildings, the majority of which were tents, over a 2,000-acre (8.1 km2) area.

All content from Kiddle encyclopedia articles (including the article images and facts) can be freely used under Attribution-ShareAlike license, unless stated otherwise. Cite this article:
Camp Doniphan, Oklahoma Facts for Kids. Kiddle Encyclopedia.