Coal County is a county located in the U.S. state of Oklahoma. As of the 2010 census, the population was 5,925. Its county seat is Coalgate.

Coal County was formed at statehood from the former Shappaway County (later renamed Atoka County) of the Pushmataha District of the Choctaw Nation in Indian Territory. A 3.5 miles (5.6 km) strip of Coal County was taken from the Pontotoc District of the Chickasaw Nation. Initially, the Oklahoma legislature named Lehigh as the county seat, but a special election held in 1908 resulted in the citizens choosing Coalgate as the county seat. Lehigh tried to sue, because more people voted than were registered, but no court would hear the case.

Mining became a mainstay of the county's economy during the 1870s. The first coal mine opened on Chief Allen Wright's land. The industry activity peaked between 1910 and 1916, but declined sharply after World War I. Many of the mines closed by 1921, due to the refusal of mining companies of the area to unionize. Some mines reopened during World War II, but these closed by 1958, because of the rising cost of refining sulfur out of the coal mined.

Agriculture replaced mining as the main economic activity of the county. Even this business encountered severe difficulty in 1921-3, when a boll weevil infestation wiped out the cotton crop. All five banks in the county failed as a result. 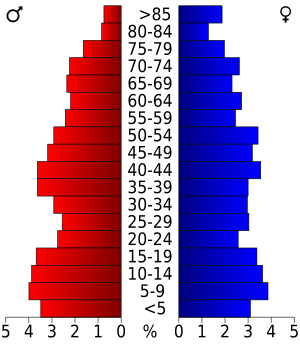 Age pyramid for Coal County, Oklahoma, based on census 2000 data. 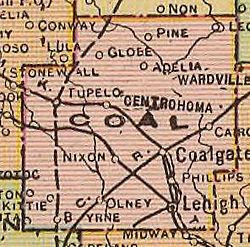 There were 2,350 households out of which 27.7% had children under the age of 18 living with them, 50.8% were married couples living together, 12.1% had a female householder with no husband present, and 31.7% were non-families. 28.1% of all households were made up of individuals and 14.6% had someone living alone who was 65 years of age or older. The average household size was 2.50 and the average family size was 3.06.

The following sites in Coal County are listed on the National Register of Historic Places:

All content from Kiddle encyclopedia articles (including the article images and facts) can be freely used under Attribution-ShareAlike license, unless stated otherwise. Cite this article:
Coal County, Oklahoma Facts for Kids. Kiddle Encyclopedia.