Hughes County is a county located in south central U.S. state of Oklahoma. As of the 2010 census, the population was 14,003. Its county seat is Holdenville. The county was named for W. C. Hughes, an Oklahoma City lawyer who was a member of the Oklahoma Constitutional Convention.

The area now occupied by Hughes County was part of Indian Territory in the 19th Century. The Creeks settled in the northern part, while the Choctaws settled in the southern. In 1834, Camp Holmes was established and used as a base for the Dodge-Leavenworth Expedition. It was near Edwards' Store on Little River, one of the first settlements in this area.

When the Choctaw, Oklahoma and Gulf Railroad built in 1895, the Edward's settlement was moved north for access to the railroad. The town established there was named Holden, for James Franklin Holder, a railroad official. However, the Post Office Department would not accept that name because it was too similar to the name Holder. The town was renamed Holdenville. The post office opened November 15, 1895. Holdenville incorporated in 1898.

Hughes County was created at statehood and named for W. C. Hughes, an Oklahoma City lawyer who was a member of the Oklahoma Constitutional Convention. 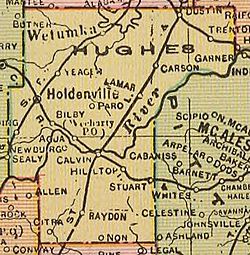 The following sites are in Hughes County are listed on the National Register of Historic Places:

All content from Kiddle encyclopedia articles (including the article images and facts) can be freely used under Attribution-ShareAlike license, unless stated otherwise. Cite this article:
Hughes County, Oklahoma Facts for Kids. Kiddle Encyclopedia.