Okfuskee County is a county located in the U.S. state of Oklahoma. As of the 2010 census, its population was 12,191. Its county seat is Okemah. The county is named for a former Muscogee town in present Cleburne County, Alabama, that in turn was named for the Okfuskee, a Muscogee tribe.

The area now covered by Okfuskee County was occupied by the Quapaw and Osage tribes until 1825, when they ceded the land to the United States government. The Creeks moved here in the early 1830s and built two towns, Greenleaf and Thlopthlocco. During the Civil War, Thlopthlocco served as headquarters for Confederate Col. Douglas H. Cooper. Greenleaf was the place where Chief Opothleyahola camped while he tried to retain unity among the Creeks, before leading over five thousand Creeks to Kansas to avoid the war.

After the war, the Creeks were required to free their African American slaves. Many of these people remained in the same area and founded all-black communities. These towns included Boley, Bookertee, Clearview, Chilesville, and Rusk. Okfuskee, a Creek town, grew up around Samuel Checote's trading post after the Civil War.

The St. Louis and San Francisco Railway built a north-south line through this area during 1901-03. The Fort Smith and Western Railroad constructed an east-west line in 1903.

Okfuskee County was created at statehood from the former Creek Nation, and Okemah was designated as the county seat. Oil and gas production began in the county in 1914, when the Prairie Oil and Gas Company completed a well near Paden. Other wells followed elsewhere in the county, creating a population boom that peaked in 1930. 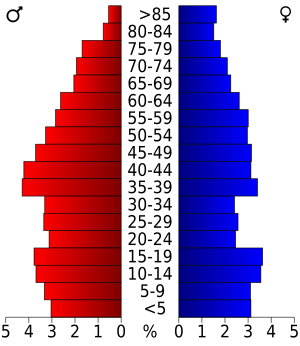 Age pyramid for Okfuskee County, Oklahoma, based on census 2000 data.

The following sites in Okfuskee County are listed on the National Register of Historic Places:

Okfuskee was the home county of American folk icon Woody Guthrie, who was born in Okemah. Guthrie refers to Okfuskee in one of his lost lyrics, "Way Over Yonder In the Minor Key." The lyrics were set to music by Billy Bragg and Wilco for their 1998 collaboration, Mermaid Avenue.

All content from Kiddle encyclopedia articles (including the article images and facts) can be freely used under Attribution-ShareAlike license, unless stated otherwise. Cite this article:
Okfuskee County, Oklahoma Facts for Kids. Kiddle Encyclopedia.