Pottawatomie County is a county located in the U.S. state of Oklahoma. As of the 2010 census, the population was 69,442. Its county seat is Shawnee.

Pottawatomie County was carved out of land originally given to the Creek and Seminole after their forced removal from Georgia and Florida. After the Civil War, the Creek and Seminole were forced to cede their lands back to the federal government, and the area of Pottawatomie County was used to resettle the Iowa, Sac and Fox, Absentee Shawnee, Potawatomi and Kickapoo tribes.

Non-Indian settlement began on September 22, 1891 when all the tribes except the Kickapoo agreed to land allotment, where communal reservation land was divided and allotted to individual members of the tribes. The remaining land was opened to settlement.

In 1895, the Kickapoo gave up their land rights and their land was given away to white settlers in the last land run in Oklahoma.

In 1930, Shawnee, now bigger in size than Tecumseh, was approved by the voters to become the new county seat.

On May 19, 2013, during an outbreak of tornadoes, a mobile home park was nearly destroyed killing a 79-year-old man and injuring at least 6 others as well as damaging at least 35 structures. Frame and brick homes west of Shawnee were also affected. 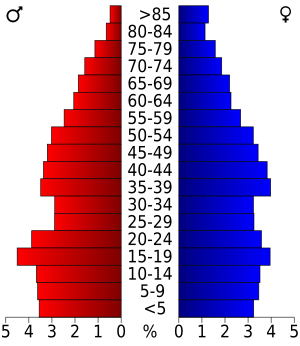 Age pyramid for Pottawatomie County, Oklahoma, based on census 2000 data.

There were 25,911 households, out of which 34.5% included children under the age of 18, 51.9% were married couples living together, 13.3% had a female householder with no husband present, 5.1% had a male householder with no wife present, and 29.7% were non-families. About a quarter of households consisted of a single individual and 9.8% had someone living alone who was 65 years of age or older. The average household size was 2.56 and the average family size was 3.04.

The Shawnee Regional Airport is located 2 nautical miles (3.7 km) northwest from the central business district of Shawnee. It is classified as a general aviation airport.

The following sites in Pottawatomie County are listed on the National Register of Historic Places:

All content from Kiddle encyclopedia articles (including the article images and facts) can be freely used under Attribution-ShareAlike license, unless stated otherwise. Cite this article:
Pottawatomie County, Oklahoma Facts for Kids. Kiddle Encyclopedia.