Asher is approximately 30 miles (48 km) south of I-40 and 34 miles (55 km) east of I-35. Nearby cities (with 15,000+ population) include Ada, Oklahoma (21 miles south) and Shawnee, Oklahoma (27 miles north). Asher is located two miles (3 km) west of Chisholm Spring, once the site of a trading post operated by Jesse Chisholm, for whom the famous cattle trail was named. A Chisholm family home and cemetery are also located in Asher. Nine miles east of Asher is the Sacred Heart Mission Site.

There were 161 households, out of which 32.3% had children under the age of 18 living with them, half (49.7%) were married couples living together, 16.1% had a single householder with no spouse present, and 34.2% were non-families. Individuals living alone accounted for 29.2% of households. Individuals living alone who were 65 years of age or older accounted for 14.3% of households. The average household size was 2.44 and the average family size was 3.01.

Asher dates back to 1892 when George "Matt" Asher, from Clay County, Kentucky, purchased land in Oklahoma Territory from a Shawnee estate salesperson to set up his farm home. The post office was established November 26, 1901 when the postmaster of nearby Avoca, Oklahoma, George A. McCurry, moved the Avoca post office and his store to the new community that would become Asher. This was done without permission from the government and left Avoca without a post office. According to the tale, McCurry was given a home and store building as payment for moving the post office to the new settlement. The town was named for Mr. Asher, who supplied the land with the consideration the community would carry his namesake, though he never lived there. There was a sale of public lots in 1902. 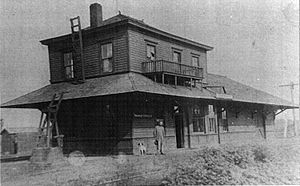 Rock Island Train Depot, Asher OK - 1902. The station was located at the west end of Main ST, west of what is now US 177. The Stationmaster, Bill Bailey, is pictured.

On October 12, 1900, the Choctaw, Oklahoma and Gulf (CO&G) bought the Shawnee to Tecumseh Railway branch from the Tecumseh Railway Co. and promptly extended the branch to Asher. For the next 40 years, Asher would serve as the termination point for the branch and its engine, "Old Beck". Rapid construction of railroads opened up 400 square miles (1,000 km2) of a fertile section of the South Canadian River valley to shipping facilities. Asher was the trade center and market of the area. Further development came when, on January 15, 1903, The Jennings Company closed on 1,000 business and residence lots. The Jennings Company advertised investment in the growing town and new factories and industries of various kinds soon located in Asher.

Asher and the new settlers had hopes of creating a large city. However, the settlers were disappointed when the towns of Seminole and Konawa were built and took away much of Asher’s trade. The people of Asher would not give up, and pulled together town resources and constructed a bridge across the Canadian River. The state then used the bridge in its construction of State Highway 18, drawing a small amount of trade to the area from nearby cities, such as Ada. Before the construction of the bridge, those south of Asher could only cross the river when it was shallow enough.

Asher, originally a cotton farming community, suffered in its early years from crop losses caused by boll weevils. Farmers were then dealt a further blow when the town’s first two cotton gins were destroyed by fire. These setbacks compounded the loss of trade and left the town in dire straits. 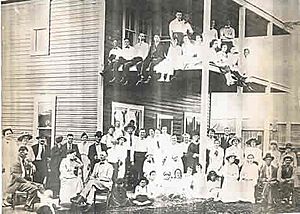 In 1927, oil was discovered in and around the town. Asher sprang up almost overnight to serve the needs of the oil workers. It was also around this time that executives moved into Asher and purchased enormous amounts of supplies and merchandise at inflated prices. There were many businesses in town including feed and grocery stores, jewelry stores and drug stores as well as banks, barber shops, hotels and a small theater. Many leading families of Oklahoma, such as the McAlisters, the O'Dells, the Patterson's, the Campbells and the Byruns, lived in the town. There were also many doctors with offices in Asher. For a while, Asher became prosperous.

Tecumseh, Oklahoma was originally the county seat of Pottawatomie County. In late 1930, a long-standing war between Shawnee and Tecumseh escalated when voters approved measures to move the seat to Shawnee. A spin-off of this feud was the move for the creation of a new county, to be named Petroleum County. The new county would be composed of prime oil-producing land, including the southern half of Pottawatomie County and portions of Seminole, Pontotoc and McClain Counties. The move was started by Tecumseh supporters who wanted to make Shawnee’s county seat victory as hollow as possible by removing the most valuable section of the county. Asher was slated to be the county seat and it was planned that the greater part of Tecumseh would move down to form an impressive community. There was a paper--The Petroleum County Times—produced, meetings held and petitions circulated. However, the measure never progressed further as times were not favorable for the creation of a new county.

End of the oil boom

The oil boom ended when only four wells proved to be profitable. Once again, Asher was in danger of dying out. Fortunately, another oil well was found just west of the town. This time the people connected to the well were local citizens and were cautious and conservative in their estimates and spending. This led to a small but steady production of oil in the community. Asher was dealt another setback in 1967 when SH-18 was taken out of commission and traffic was diverted west of town on the new US Highway 177. Businesses migrated to the new highway and many storefronts in the original town were closed. The final business, Green's Market, which was located on Division Street (old SH-18) closed in 1985, after serving the community for 40 years. Several businesses on US-177 remain, mostly serving those traveling through the area.

In 2001, Asher celebrated its 100th anniversary. The town, along with others in the county that had passed the centennial mark, was honored on a centennial monument dedicated September 21, 2007. This date was chosen to coincide with the Oklahoma Centennial. Other Asher honorees were the First Baptist Church, which was founded in 1902 and Asher School, which was established in 1903. The monument is located in Centennial Park, on the grounds of the Santa Fe Museum, in Shawnee, Oklahoma.

Below is a time table of major events that occurred in Asher as well as surrounding communities whose events affected Asher's history.

Asher's Post Office was established on November 26, 1901 when it was moved from nearby Avoca. 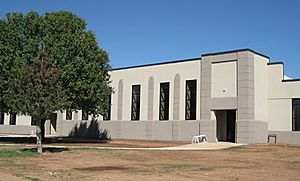 Asher Public Schools is an independent school district. It has an elementary school (grades Pre-K to 8) and a high school (grades 9 to 12). The school was established in 1903. In 1913, there were four other school districts within three miles (5 km) of Asher—Clover Dale, Gravel Hill, Avoca, and Pleasant Hill. The schools were small, consisting of only a room or two. Basic facilities were at a minimum. Talk began of consolidating all of the schools into the Asher district. This was later accomplished, presumably around the time Asher’s new school building was built in 1929.

Asher Schools’ main and original building (after consolidation) was constructed in 1929. The building would later receive two additions, to either end. The center of the facility originally served as the schools’ gym, before being converted to an auditorium when a new gym was built in the 1940s. An extensive renovation was completed in late 2006 on the original building. The work was made possible by a $1.295 million bond issue that was approved by residents in February 2005. 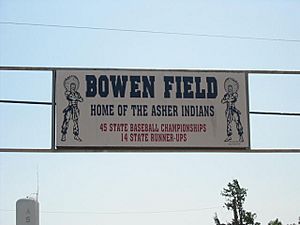 Asher School, the Indians, participates in baseball, softball and men and women's basketball. Probably no small town is known as well for a sport than Asher is. For forty years, from 1959 to 1999, Asher had the winningest high school baseball team in the nation, led by head coach Murl Bowen. In those forty years, Asher won 2,115 games, lost only 349, hauled home forty-five state championship trophies and fourteen state runners-up, and sent dozens of players to college and minor-league baseball. No high school in history, public or private, has won as many games as the Asher Indians. The baseball field in Asher was named after Murl Bowen for all the winnings he led Asher to in his coaching years that he was there, and his ever-lasting impression that he left on all Asher citizens. Up to this date, even after slipping into retirement, you can still see Mr. Murl Bowen at the school's basketball games and boys' baseball games.

All content from Kiddle encyclopedia articles (including the article images and facts) can be freely used under Attribution-ShareAlike license, unless stated otherwise. Cite this article:
Asher, Oklahoma Facts for Kids. Kiddle Encyclopedia.