Kids Encyclopedia Facts
Not to be confused with Cleveland, Oklahoma.

Cleveland County is a county in the central part of the U.S. state of Oklahoma. The population was 255,755 at the 2010 census, making it the third-most populous county in Oklahoma. Its county seat is Norman. The county was named after U.S. President Grover Cleveland.

Originally occupied by the Quapaw tribe, the Quapaw ceded the area to the U.S. Government soon after the Louisiana Purchase in 1818. During the late 1820s and 1830s, the area was given to the Creek and Seminole tribes after their forced removal from the southeastern United States. An agreement between the two tribes resulted in this area being part of the Seminole Nation, located west of the Creek Nation.

In 1866, these tribes were forced to cede the area to the Federal Government for siding with the Confederacy during the American Civil War. The area became part of the Unassigned Lands and was opened for white settlement on April 22, 1889. 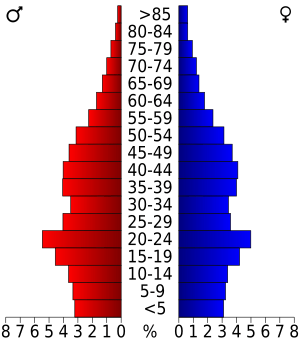 Age pyramid for Cleveland County, Oklahoma, based on census 2000 data.

There were 98,306 households, of which almost half (49.9%) included married couples living together and more than a third (34.7%) were non-families. Almost a third (32.9%) included children under the age of 18, 10.7% had a female householder with no husband present, and 4.7% had a male householder with no wife present. More than a fourth (25.9%) of households consisted of a sole individual and 6.9% were individuals 65 years of age or older living alone. The average household size was 2.49 and the average family size was 3.02.

The following sites in Cleveland County are listed on the National Register of Historic Places:

All content from Kiddle encyclopedia articles (including the article images and facts) can be freely used under Attribution-ShareAlike license, unless stated otherwise. Cite this article:
Cleveland County, Oklahoma Facts for Kids. Kiddle Encyclopedia.