Kids Encyclopedia Facts
Not to be confused with Canadian, Oklahoma.

Canadian County is a county located in the U.S. state of Oklahoma. As of the 2010 census, the population was 115,541, making it the fifth-most populous county in Oklahoma. Its county seat is El Reno. The county is named for the Canadian River.

In 1859, the U.S. Government moved the Caddo of Louisiana from its Brazos reservation in Texas to what would eventually become Canadian County, Oklahoma. Showetat, the last hereditary chief of the Caddos set up his camp near the present Union City, and is considered Canadian County's first permanent resident. The Wichita tribe were relocated to the same part of Indian Territory in 1861. The Treaty of Medicine Lodge gave the land west of the Caddos and Wichitas to the Cheyenne and Arapaho tribes, They moved from Colorado in 1869. The Cheyenne-Arapaho Agency (later renamed the Darlington Agency) was established in 1870.

Canadian County was formed in 1889 as County Four of Oklahoma Territory as part of the Oklahoma Organic Act, which created Oklahoma Territory from part of Indian Territory. It was named after the Canadian River, which runs through the county, and settled by white settlers after the April 22, 1889, land run that opened up Native American land. It was expanded by a second land run in 1892 and finally, the opening of the Cheyenne and Arapaho lands in 1902. El Reno was chosen as the county seat over competitors Reno City, Frisco, and Canadian City.

The county was where the last great battle between the Cheyenne, Arapaho and the United States Army took place.

The North Canadian River enters Canadian County near the northwest corner, flows generally southeast towards the middle of the county, then turns southward to leave the county about 8 miles (13 km) north of the southeastern corner. The river length is about 76 miles (122 km). The elevation drops from 1,420 feet (430 m) at the entry to about 1,200 feet (370 m) at the exit. Its named tributaries are Sixmile Creek, Fourmile Creek, Purcell Creek, Shell Creek and Mustang Creek.

The Cimarron River does not flow through the county, but drains part of the northeastern area via its tributaries: Kingfisher, Dead Indian, Uncle John, Cottonwood, Soldier and Deer Creeks. The Washita River flows more than 20 miles (32 km) south of the county, but drains about 5 square miles (13 km2) in the southwest corner of Canadian County. 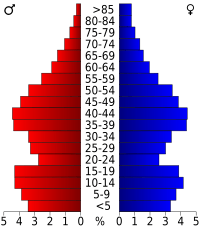 Age pyramid for Canadian County, Oklahoma, based on census 2000 data

The following sites in Canadian County are listed on the National Register of Historic Places:

All content from Kiddle encyclopedia articles (including the article images and facts) can be freely used under Attribution-ShareAlike license, unless stated otherwise. Cite this article:
Canadian County, Oklahoma Facts for Kids. Kiddle Encyclopedia.