From 1867 to 1884, cattle were driven through the area on the Chisholm Trail from Texas to railheads in Kansas. Later the Chicago, Rock Island and Pacific Railroad and what would become U.S. Highway 81 would follow roughly the same route through Oklahoma Territory. 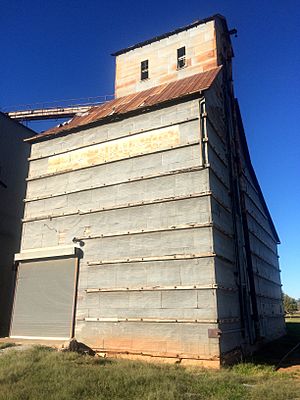 On March 2, 1887, the U.S. Congress approved construction of a railroad through Indian Territory. The Chicago, Kansas and Nebraska Railway was given a 100-foot (30 m) right of way through the territory and authorized to take additional right of way for stations every 10 miles (16 km) of track. Railway assets would be turned over to the CRI&P in June 1890. Construction proceeded southward from Caldwell, Kansas, and was completed to Pond Creek by April 1889 and to El Reno in January 1890. The railway depot where Okarche was platted was completed at that time.

The Okarche post office was established June 28, 1890. Cheyenne and Arapaho lands were opened to settlement by land run on April 19, 1892. The town was incorporated in 1905 – two years before statehood. The name of the town is derived from parts of three words, Oklahoma (OK), Arapaho (AR), and Cheyenne (CHE). The Southern Arapaho and Cheyenne Native American tribes had been relocated to Oklahoma from the northern Great Plains in the late 19th century. The town's population hovered in the 400s for more than three decades after statehood had risen to over 1,200 by 2010.

By the late 1890s, German immigrants were a greater part of the population and German a widely used language of the community. Many had come to America in the wave of 1.5 million German immigrants to the United States in the 1880s and lived in states to the north such as Iowa, Nebraska, or Missouri before coming to Oklahoma Territory. Catholic and Lutheran churches with schools were established as immigrants sought to keep faith and customs from the old country alive in their new home. St. John's Lutheran Church was founded in 1892 and Holy Trinity Catholic Church in 1893. Worship and education was conducted principally in German until American entry into World War I in 1917. Bilingual worship would continue for about two decades.

When federal highway numbering was implemented in 1927, the state road through Okarche was designated US-81 and fully paved in the Okarche area by 1931. The Northwest Highway (OK-3) was opened as a gravel-surfaced road in 1939 and fully paved by 1947. Okarche now has four-lane divided highway access to neighboring communities, including the Oklahoma City metro area. The Chicago, Rock Island and Pacific Railroad entered its final bankruptcy in 1975. The Union Pacific Railroad now operates on the former Rock Island route.

The town is best known for Eischen's Bar, which claims to be "the oldest bar" in the state of Oklahoma and famous for its secret recipe fried chicken. In 2009, Food Network's program, Guy Fieri's Diners, Drive-Ins and Dives, visited Eischen's, and the bar was featured on the television show.

All content from Kiddle encyclopedia articles (including the article images and facts) can be freely used under Attribution-ShareAlike license, unless stated otherwise. Cite this article:
Okarche, Oklahoma Facts for Kids. Kiddle Encyclopedia.