Blaine County is a county located in the U.S. state of Oklahoma. As of the 2010 census, the population was 9,785. Its county seat is Watonga. Blaine County is the birthplace of voice actor Clarence Nash, the voice of Disney's Donald Duck.

Part of the Cheyenne-Arapaho land opening in 1892, the county had gained rail lines by the early 1900s and highways by the 1930s. The county was named for James G. Blaine, an American politician who was the Republican presidential candidate in 1884 and Secretary of State under President Benjamin Harrison.

Blaine County was one of several counties created by the Land Run of 1892. It was designated as county "C" beginning in 1890 before the land run. The area was settled by Creek and Seminole, who the federal government relocated to the area in the 1820s and 1830s. The Cheyenne and Arapaho tribes were relocated to the area from Colorado in 1869, after the Reconstruction Treaties of 1866 had taken the land back from the Creek and Seminole.

The land run was held after giving members of the tribe allotments of 160 acres (0.65 km2) each.

A post office established in the county seat of Watonga, Oklahoma the same year as the land run. The Enid and Anadarko Railway and the Blackwell, Enid and Southwestern Railroad both ran lines through the county from 1901 to 1903. The Blaine County Courthouse was built in 1906.

The town of Geary, which also received a post office in the same year as the land run, became an agricultural trade center in the county and had a population of 2,561 by 1902. The town was home to "the oldest bank in Blaine County." Okeene was also established in the year of the land run and was surrounded by farmers of German descent.

The U.S. highway system reached Oklahoma in 1926. U.S. Highways 270 and 281 were constructed through Blaine County. The county was also served by the Postal Highway as early as 1912; it later became part of U.S. Highway 66.

The county's population peaked at 20,452 in 1930. New Deal programs such as the Civilian Conservation Corps employed county residents and built Roman Nose State Park, which opened in 1937.

According to the U.S. Census Bureau, the county has a total area of 939 square miles (2,430 km2), of which 928 square miles (2,400 km2) is land and 10 square miles (26 km2) (1.1%) is water. The northeastern half of the county is located on the western edge of the Red Bed Plains while the southwestern half lies in the Gypsum Hills. The North Canadian River runs through the county from northwest to southeast. 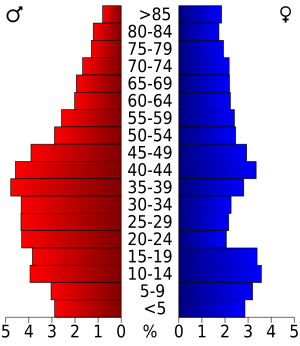 Age pyramid for Blaine County, Oklahoma, based on census 2000 data.

The following sites in Blaine County are listed on the National Register of Historic Places:

All content from Kiddle encyclopedia articles (including the article images and facts) can be freely used under Attribution-ShareAlike license, unless stated otherwise. Cite this article:
Blaine County, Oklahoma Facts for Kids. Kiddle Encyclopedia.