Kids Encyclopedia Facts
Not to be confused with Dewey, Oklahoma.

Dewey County is a county in the western part of the U.S. state of Oklahoma. As of the 2010 census, the population was 4,810. Its county seat is Taloga. The county was created in 1891 as "County D". In an 1898 election, county voters chose the name Dewey, honoring Admiral George Dewey.

Lands assigned to the Choctaw and Seminole tribes extended into the area now occupied by Dewey County. Under the Reconstruction Treaties of 1866 the Choctaw and Chickasaw ceded their western domain to the United States. Known as the Leased District, part of the area became the Cheyenne and Arapaho reservation.

Dewey County was created in Oklahoma Territory in 1891 and was opened to non-Indian settlement on April 19, 1892. It was then named as County D by an act of Congress, and did not receive its present name until a general election in 1898. A wooden structure in Taloga was used as the county courthouse from 1909 until 1926, when the present courthouse was built. 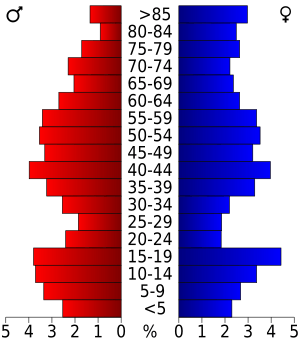 Age pyramid for Dewey County, Oklahoma, based on census 2000 data.

All content from Kiddle encyclopedia articles (including the article images and facts) can be freely used under Attribution-ShareAlike license, unless stated otherwise. Cite this article:
Dewey County, Oklahoma Facts for Kids. Kiddle Encyclopedia.