Woodward County is a county located in the U.S. state of Oklahoma. As of the 2010 census, the population was 20,081. Its county seat is Woodward.

Woodward County was originally known as "N" County and was composed of present-day Woodward County and portions of Harper, Ellis, and Woods County. Before its division at statehood, Woodward County, then 60 miles square, was the westernmost county of the Cherokee Outlet and adjoined Texas and the Oklahoma Panhandle on the west and Kansas on the north. Political pressure applied by William H. Murray during Oklahoma's Constitutional Convention resulted in the reduction of the size of Woodward County to its present boundaries. It is unknown exactly whom the county (and the town) is named after, but the two leading candidates are Brinton W. Woodward, a Santa Fe railway director, or Richard Woodward, a buffalo hunter.

In the 19th century, the county was part of a well-used military transportation corridor that was important to frontier defense. In 1868, Camp Supply, was established as a depot leading up to a campaign against the Cheyenne. From 1876 through the 1880s massive herds of cattle passed through the southwestern corner of the county along the Great Western Trail from Texas to Kansas.

The Southern Kansas Railway, later acquired by the Atchison, Topeka and Santa Fe Railway built a line southwest from Kiowa, Kansas, through the region and into Texas during 1886-1887. It began the town of Woodward where the railroad crossed the military road. The Wichita Falls and Northwestern Railway, controlled by the Missouri, Kansas and Texas Railway, constructed a north-south line from Elk City through Sharon, Woodward, and the town of Fort Supply to Forgan, in Beaver County, in 1911-12.

In September 1893, when the Cherokee Outlet opened for non-Indian settlement, Woodward County was created as County N in Oklahoma Territory, though its area was much larger than at present. In a November 6, 1894, election, the county was renamed Woodward County. Statehood in 1907 redrew the boundaries of the county, while the remainder was given to the present Harper, Ellis and Woods counties.

The county is part of the Osage Plains and lies within the Western Red Prairies physiographic region and Gypsum Hills subregion. There are gypsum hills in the eastern and northwestern parts of the county. Protected areas in the county are Alabaster Caverns State Park and Boiling Springs State Park. 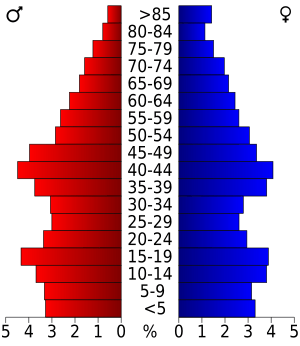 Age pyramid for Woodward County, Oklahoma, based on census 2000 data.

All content from Kiddle encyclopedia articles (including the article images and facts) can be freely used under Attribution-ShareAlike license, unless stated otherwise. Cite this article:
Woodward County, Oklahoma Facts for Kids. Kiddle Encyclopedia.