Woods County is a county located in the northwestern part of the U.S. state of Oklahoma. As of the 2010 census, the population was 8,878. Its county seat is Alva. The county is named after Samuel Newitt Wood, a renowned Kansas populist.

The known explorer of the area now contained within Woods County was George C. Sibley, who traveled through in 1811. He visited a salt formation near the present town of Freedom, Oklahoma, then followed the Mountain Fork of the Arkansas River southeastward to the Great Salt Plains. In 1843, Nathan Boone traveled along the Cimarron River.

The area was part of the so-called Cherokee Outlet, acquired by the Cherokee Nation under the Treaty of New Echota. It later became important for cattle ranching. The Dodge City and Red Fork Trail, a branch of the Chisholm Trail followed the north bank of the Cimarron River en route to Kansas. The U. S. Government acquired the Cherokee Outlet under Congressional Acts in 1889, 1891 and 1893, and divided the area into counties. One of these was designated M County, prior to opening the area for settlement. The Secretary of the Interior designated Alva as the county seat. M County was renamed Woods County by an election on November 6, 1894. Woods County became part of Oklahoma Territory.

The Constitutional Convention of 1906 created Major County and Alfalfa County from southern and eastern parts of Woods County and added a part of Woodward County to Woods County. 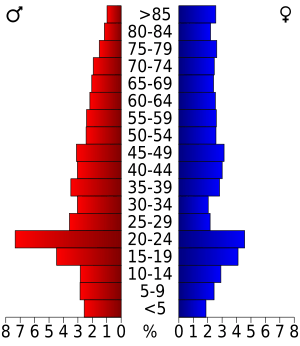 Age pyramid for Woods County, Oklahoma, based on census 2000 data.

There were 3,533 households, out of which 23.2% had children under the age of 18 living with them, 47.9% were married couples living together, 7.6% had a female householder with no husband present, and 40.2% were non-families. 32.3% of households were made up of individuals and 8.8% had someone living alone who was 65 years of age or older. 8.2% of the population was institutionalized The average household size was 2.23 and the average family size was 2.82.

All content from Kiddle encyclopedia articles (including the article images and facts) can be freely used under Attribution-ShareAlike license, unless stated otherwise. Cite this article:
Woods County, Oklahoma Facts for Kids. Kiddle Encyclopedia.