Alva is a city in and the county seat of Woods County, Oklahoma, United States, along the Salt Fork Arkansas River. The population was 4,945 at the 2010 census. Northwestern Oklahoma State University is located in Alva.

Alva was established in 1893 as a land office for the Cherokee Outlet land run, the largest of the land rushes that settled western and central Oklahoma. The site was chosen for its location on the Atchison, Topeka & Santa Fe Railway and likely named for a railroad attorney, Alva Adams, who had become governor of Colorado.

When the Southern Kansas Railway, began extending its line from Kiowa, Kansas across the Cherokee Outlet in 1886, Alva became the first railroad station southwest of Kiowa. The line was operational in 1887, in time for the opening of the Unassigned Lands.

The Secretary of the Interior chose Alva as the seat of County M when Oklahoma Territory was organized in 1890. A U.S. government land office opened there before a presidential proclamation on August 19, 1893, opened the Cherokee Outlet for general settlement . The actual land run occurred September 16, 1893. By then, Alva's 320 acres (1.3 km2) site had been formally surveyed and platted.

During World War II, Alva was the site of a prisoner of war camp for German POWs. On July 19, 1943, the United States Department of War ordered that Camp Alva would be the place for the internment of the most troublesome German prisoners of war – "Nazi leaders, Gestapo agents, and extremists".

Today, the city council is actively soliciting murals and trying to attract businesses and tourists to keep people in town. Alva lost 200 people between 1990 and 2000 according to official census figures. The Alva Review-Courier is published Sunday, Wednesday, and Friday.

U.S. Route 64 runs east–west through the center of the city, intersecting U.S. Route 281, which runs north–south. Route 281 joins Route 64 for one mile between College Boulevard (west) and Lane Boulevard (east) on Oklahoma Boulevard.

Alva Regional Airport, a 650-acre general aviation facility owned and operated by the city, is immediately south of the city on the west side of U.S. Route 281.

Alva is located on the Panhandle Subdivision of the Southern Transcon route of the BNSF Railway. This is the main transcontinental route between Los Angeles and Chicago, and carries an average of 90 freight trains per day. In January 2015 BNSF Railway announced an expansion project to add a second track between Wellington, Kansas and Avard, Oklahoma passing through Alva as part of a $175 million expansion in the South Region. By October of 2018, the entire Southern Transcon was double-tracked, except for two bridges.

Agriculture has been the basis of the city's economy since it was founded. Initially, the local farms produced a variety of crops and livestock. The original 160-acre farms have mostly been consolidated into much larger units, concentrating on production of beef and wheat.

Aeronautics firm Vantage Plane Plastics, located at the airport, claims the title of "the world's largest supplier of FAA Approved interior components for most all general aviation aircraft", employing 24 people with 2016 gross sales of $3.8 Million.

In 1998 a group of local wheat farmers founded the frozen dough manufacturing facility, Value Added Products, a cooperative that in 2017 employed 83 people with an annual payroll of $2.2 Million.

NWOSU is the largest employer in Alva. 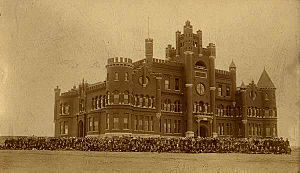 Alva is home to Northwestern Oklahoma State University (NWOSU), founded in 1897 as a 'Northwestern Normal School'. President James E. Ament and two teachers made up the first faculty, with classes meeting in the Congregational Church. The college's main building was built in 1899 and known as the "Castle on the Hill," a huge, fanciful brick building, modeled after a Norman castle, that towered over much of the town. The Castle burned down in 1935 and was replaced by Jesse Dunn Hall, which was dedicated in 1937 by Eleanor Roosevelt. By 1939, all of the normal schools, including Northwestern State College, offered bachelor's degrees and were reclassified as state colleges. In the 1950s, Northwestern added a fifth-year program culminating in a master's degree. In 1974, the name changed to its present 'Northwestern Oklahoma State University'. In 1996, branch campuses in Woodward and Enid expanded the university's useful service area. The university also boasts a proud tradition in athletics, competing as the Northwestern Oklahoma State Rangers in the Great American Conference. Formerly residing in the Sooner Athletic Conference in the NAIA, the Rangers made the move to NCAA Division II membership in 2012 under the direction of current university president Dr. Janet Cunningham, and former Director of Athletics Andrew Carter.

Northwest Technology Center is based in Alva.

The Alva Independent School District oversees the five public school facilities and a district office in the Alva area.

All content from Kiddle encyclopedia articles (including the article images and facts) can be freely used under Attribution-ShareAlike license, unless stated otherwise. Cite this article:
Alva, Oklahoma Facts for Kids. Kiddle Encyclopedia.