Woodward is a city in and the county seat of Woodward County, Oklahoma, United States. It is the largest city in a nine-county area. The population was 12,051 at the 2010 census.

The area was historically occupied by the Kiowa, Comanche, Cheyenne and Arapaho tribes. European-American settlers established the town in 1887 after construction of the railroad to that point for shipping cattle to markets. The town was on the Great Western Cattle Trail. In the 19th century, it was one of the most important depots in the Oklahoma Territory for shipping cattle to the East. As an important cattle town, it had the rough frontier bawdiness of the time. The United States opened up much of the area to European-American settlement by the Land Run of 1893 and migrants rushed into the area.

Boiling Springs State Park, named for its artesian springs that seem to boil, has been established east of the city. After statehood, in 1911 Woodward was established as a court town for the US District Court of western Oklahoma. Annual federal dockets were held annually in November through 1948, and sporadically by need after that. 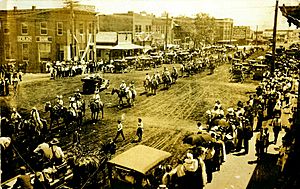 For thousands of years, succeeding cultures of indigenous peoples inhabited the areas along the North Canadian River. The Plains tribes adopted use of the horse from the Spanish settlers in the 17th and 18th centuries, which greatly increased their range of nomadic hunting. Before the American Civil War, the historic Plains tribes of the Kiowa, Comanche, Apache, Cheyenne, and Arapaho occupied this area.

Boiling Springs, near present-day Woodward, was a favorite campsite of the Plains Indians. A battle between the Kiowa and Cheyenne tribes took place nearby in 1838. The Kiowa and Comanche tribes also battled the United States Army in 1868 in this area, when the US redeployed troops after the Civil War against Native Americans in the West.

In the late 19th century, these tribes fought numerous battles against the United States soldiers and settlers through a wide area around the springs. After the war, United States Army made various expeditions against the Plains tribes in the Cherokee Outlet. Lieutenant colonel Alfred Sully, lieutenant colonel George Armstrong Custer, and General Philip Sheridan, stationed nearby at Fort Supply, led these expeditions. In the 1880s, the Comanche considered this area as part of their "Comancheria", the unofficial name of their territory, which stretched from Kansas to Mexico.

Settlement as a Town

In April 1887, the Southern Kansas Railway, a subsidiary of the Atchison, Topeka and Santa Fe Railway, built tracks from Kiowa, Kansas to Fort Reno Military Road near the south bank of the North Canadian River. European-American settlers established Woodward at this junction. The source of the name of the town a mystery. People perhaps named the town for Brinton W. Woodward, usually identified as a Santa Fe Railway director, or bison hunter, teamster, and eventually local saddle-maker Richard "Uncle Dick" Woodward.

The town quickly developed as an important shipping point, both for provisioning Fort Supply and as a place for loading cattle grazed in the Cherokee Outlet for shipment to eastern markets. Woodward ranked among the most important depots in the Oklahoma Territory for shipping cattle to the Eastern and Northern states. The Great Western Cattle Trail met the railroad where Woodward developed. In the summer of 1893, carpenters erected the first government building at the railroad depot, called Woodward. Woodward then embraced two hundred residents.

On 16 September 1893, officials opened the Cherokee Outlet across northern Oklahoma, which more than fifty thousand migrants settled in the greatest land run in American history. A surveying error then caused location of the government town, its land office, and other public buildings in the section west of the existing improvements, fifteen blocks away from the depot, post office, and stockyards. Since territorial days, Woodward served as the county seat of Woodward County.

Two towns developed. East Woodward, called Denver, began near the improvements, and Woodward began near the land office. In October 1894, people moved the depot west and relocated it between Fifth Street and Sixth Street; East Woodward businesses followed the depot. Government in time moved the land office, jail, and other buildings east toward the depot. The towns merged into one. The joining resulted in the curve in the long Main Street of the town at Eighth Street, originally Boundary Street.

On 13 March 1894, outlaws Bill Doolin and Bill Dalton robbed the railroad station at Woodward, taking an undisclosed amount of money.

People later elected Jack E. Love to the Oklahoma Corporation Commission, and he served as its first chairman.

Woodward ranked as one of the most extensive cattle shipping points in Oklahoma Territory. Some men rode for the large cattle outfits of the 1890s and later developed rodeo as a sport. Cow ponies, tied to hitching posts, lined the sandy Main Street.

When open range ended in 1901, however, homesteaders rushed into Woodward County. Wagons of farmers, filled with corn, cotton, or sorghum crops for market, before late 1902 quickly replaced the cow ponies.

On 7 September 1907, William Jennings Bryan spoke to twenty thousand people gathered in Woodward, urging the ratification of proposed state constitution of Oklahoma and the election of a Democratic Party ticket. Two months later, President Theodore Roosevelt, signed the act of Congress proclaiming admission of Oklahoma as a state with the quill from an American golden eagle, captured near Woodward. Population of Woodward exceeded two thousand at statehood of 1907.

An Act of Congress in 1911 designated Woodward a court town for the United States District Court for the Western District of Oklahoma.

The Wichita Falls and Northwestern Railway constructed a rail line through Woodward County and Woodward in 1911/1912; the Missouri–Kansas–Texas Railroad later acquired this line.

People introduced successfully Hereford cattle in Woodward County. With this development, cattlemen, such as William Thomas Waggoner, attempted to lease school lands in Woodward County for grazing. These attempts led Woodward County ranchers to form the Oklahoma Livestock Association. At the urging of United States Senator Thomas Pryor Gore and David P. Marum, the former law partner of Temple Lea Houston, in 1912 the United States government located an agricultural research station in Woodward. With the dairy cows replacing beef cattle and progress measured in the number of plow-broken acres, the United States Department of Agriculture established the Great Plains Field Station, immediately southwest of town, in 1913. Wagons of farmers with other crops gave way to wheat as the cash crop before 1914.

People constructed Woodward Federal Courthouse and Post Office in Woodward in 1918, and it opened in 1921. Federal court held dockets annually each November in Woodward.

The Woodward News began as the local newspaper in 1926.

Some of the men who rode for the large cattle outfits three decades earlier organized the Elks Rodeo, which began in 1929 at an arena north of town. The ranching and cattle industries still dominated economy of Woodward.

During the Great Depression, local Works Progress Administration projects included the damming of an artesian well, a failed oil-well venture, to form Crystal Beach Lake and its adjacent park. This facility served as a playground for trade area of Woodward and home for the Elks Rodeo.

Town leaders certainly prevented fencing of the market drives away from the stockyards in the early years. On 23 February 1933, the Woodward Livestock Auction, the first commercial-grade cattle auction in Oklahoma, opened, keeping the cattle-marketing tradition.

On 13 September 1934, Charles Lindbergh and Anne Morrow Lindbergh made an unexpected emergency landing 23 miles (37 km) northeast of Woodward. They spent two days at a rural farm, waiting for a relief plane to arrive at Woodward. Charles Lindbergh refused to give any interviews but said that he and his wife, eager for privacy, no longer wanted the public spotlight.

From 1934, Trego’s Westwear manufactured western cut clothing for customers all over the world. The company frequently made costumes for rodeo stars, movie stars, Dale Evans, and Roy Rogers.

Early in 1956, Charles Woodward Pappe, an entrepreneur from Kingfisher, Oklahoma, met Troy Smith (businessman) while visiting friends in Shawnee, Oklahoma. On May 18, 1956, Pappe opened his second Top-Hat Drive-In Restaurant in Woodward. Pappe inspired Smith to found Sonic Drive-In, which eventually became one of the largest chain of fast food restaurants in the United States.

One of the largest deposits of iodine in the world underlies many portions of Woodward County. Since 1977, numerous companies explored and produced this crude iodine. These companies include Woodward Iodine and Deepwater Chemicals, located in Woodward.

As beef cattle again dominated the land and with the new goal of reestablishing grassy pastures, in 1978, United States Department of Agriculture renamed its facility the Southern Plains Range Research Station.

The population exceeded ten thousand in the 1970s. Good times brought a new high school, a vocational-technical school, a new post office, a new hospital, and an industrial park.

The economic downturn in the early 1980s, however, caused the first population decrease in the history of the city.

With increasingly casual dress in the 1980s and 1990s, interest in Western wear waned. Trego’s Westwear closed its manufacturing plant in 1995 and ceased operations in 1999.

Various local attractions include the Plains Indians and Pioneers Museum in Woodward.

On April 9, 1947, the deadliest tornado in Oklahoma history (an F5 on the Fujita Scale) tore through Woodward, killing 107 people, injuring almost 1000, and destroying 100 city blocks. The family of tornadoes, known as the 1947 Glazier–Higgins–Woodward tornadoes, ranked as the sixth deadliest in US history. They caused many fatalities and much damage in other communities in Texas, Oklahoma, and Kansas.

The city lies on the North Canadian River, 100 miles (160 km) east-southeast of Guymon, Oklahoma and 85 miles (137 km) west of Enid, Oklahoma. As the largest city in an area of nine counties, it is a commercial hub in northwestern Oklahoma.

There were 4,787 households out of which 33.6% had children under the age of 18 living with them, 54.6% were married couples living together, 9.5% had a female householder with no husband present, and 32.2% were non-families. 28.2% of all households were made up of individuals and 11.9% had someone living alone who was 65 years of age or older. The average household size was 2.43 and the average family size was 2.98.

All content from Kiddle encyclopedia articles (including the article images and facts) can be freely used under Attribution-ShareAlike license, unless stated otherwise. Cite this article:
Woodward, Oklahoma Facts for Kids. Kiddle Encyclopedia.