Guymon ( GHY-mən) is a city and county seat of Texas County, in the panhandle of Oklahoma, United States. As of the 2020 census, the city population was 12,965, an increase of 13.3% from 11,442 in 2010, and represents more than half of the population of the county. Cattle feedlots, corporate pork farms, and natural gas production dominate its economy, with wind energy production and transmission recently diversifying landowners' farms.

In the 1890s, Edward T. “E.T.” Guymon, president of the Inter-State Land and Town Company, purchased a section of land west of the Beaver River, also known as the North Canadian River. The site grew very rapidly after the Chicago, Rock Island and Pacific Railway (Rock Island) built a line from Liberal, Kansas to Texhoma, Texas in 1901. A community, first named Sanford by the U.S. Post Office Department, was sited along the line. It was renamed Guymon a month later by postal officials to avoid confusion with the town of Stratford, Texas, which was further down the line. Guymon incorporated in 1901. The town plat was filed in Beaver County, Oklahoma Territory, in 1904. 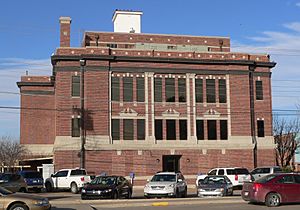 Guymon's growth was helped when most of the businesses moved there from the nearby town of Hardesty. One of these was the newspaper, Hardesty Herald, which owner Richard B. Quinn quickly renamed as the Guymon Herald. When Oklahoma became a state in 1907, Guymon claimed 839 residents, and was named county seat of the newly created Texas County. By the 1910 U.S. census, the town had 1,342 residents. It also had three banks, three hotels, four doctors, a flour mill, a grain company and several retail establishments. A second newspaper, the Guymon Democrat, was in business. Agriculture became the basis of Guymon's economy. The 1920 census recorded 1,507 residents, which grew to 2,181 in 1930. By 1932, the town had two cream stations and five grain elevators.

The Great Depression and the Dust Bowl of the 1930s had a negative effect on Guymon. Some old-time residents remember "Black Sunday", April 14, 1935, as the day of the worst dust storm in the area's history. However, discovery of the nearby Hugoton-Panhandle gas field created many new jobs, and brought Guymon's population to 2,290 in 1940.

The Guymon Pioneer Days Rodeo has offered tributes to the community’s pioneer spirit every May since 1933. In 2014 the rodeo was inducted into the ProRodeo Hall of Fame of the Professional Rodeo Cowboys Association (PRCA). In 2006, the rodeo had over 900 contestants with over $385,000 in prize money.

The Anchor D Ranch, a large cattle ranch in the No Man's Land section of the Oklahoma-Texas Panhandle, is located nearby.

In the 2010 census, Guymon had the fourth largest Hispanic population among cities in the state, trailing only Oklahoma City, Tulsa and Lawton.

The city's largest employer, Seaboard pork processing plant, operates at double shift capacity and processes about 18,000 hogs each day, and its 2,300 employees make up about 20% of the entire city's population. Hitch Ranch, which began opening cattle feedlots during the 1960s, is the city's second-largest employer. A Swift and Company packing plant is located near Hitch Ranch. The City of Guymon, the Panhandle Telephone Cooperative, and the hospital round out the list of top employers.

A movement to harness wind power for electricity generation began a large-scale boom in the Guymon area in 2011. The DeWind Company had two 40-megawatt projects online (near Goodwell) in 2012, joined by a 200-megawatt project in 2015.

Guymon residents are served by the Guymon School District. The school system was begun in 1902–3. The first high-school building was built in 1917. Guymon schools were closed for one year during the Great Depression because funds were insufficient to keep them operating. The school district opened a new high school in 1954. This was replaced with a new facility in 1974.

The city has eight elementary schools, one junior high school, and one high school, whose team mascot is the Tiger.

More than 80% of high school students qualify for a reduced-price school lunch, a common proxy for poverty.

About 30% of residents lack a high school diploma; the city has the lowest educational level in the state. Guymon High School lags behind the state average in several measures.

Guymon is served by US-54, US-64, US-412, SH-3, and SH-136, some of said roads being partially concurrent or completely concurrent with others through Guymon.

Commercial air transport is available out of Liberal Mid-America Regional Airport in Kansas, about 41 miles northeast of town.

All content from Kiddle encyclopedia articles (including the article images and facts) can be freely used under Attribution-ShareAlike license, unless stated otherwise. Cite this article:
Guymon, Oklahoma Facts for Kids. Kiddle Encyclopedia.